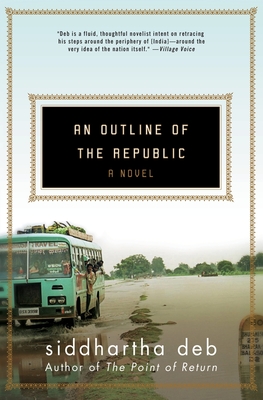 An Outline of the Republic

Intrigued by a disturbing photograph of a woman, a young journalist in Calcutta embarks on a quest to learn the story behind the violent incident captured on film -- a strange odyssey that leads him to a volatile remote corner of India mired in civil strife and sustained by timber, drugs, and guns. Yet the truth he hopes to uncover is as uncertain as the mysterious woman he seeks, smoldering dangerously on the border between illusion and reality.


Praise For An Outline of the Republic: A Novel…

“A sophisticated adventure novel. . . . Deb [is] an author with great craft and potential.”
— Kirkus Reviews

“An immersion into the heart of India…. Deb is a fluid, thoughtful novelist.”
— Village Voice

“A compelling account of an unstable region’s hopes and frailties by way of an individual’s tortuous soul search.”
— Time Out New York

Siddhartha Deb was born in northeastern India in 1970. His first novel, The Point of Return, was a New York Times Notable Book of the Year. His reviews and journalism have appeared in the Boston Globe, the Guardian, The Nation, the New Statesman, and the Times Literary Supplement. He came to New York on a literary fellowship in 1998, and now divides his time between India and New York.