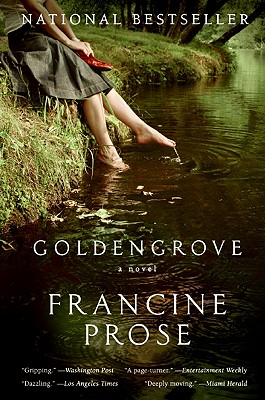 “What might have been a mournful story about a young girl's isolation and grief after the death of her sister becomes an uplifting portrait of love, survival, and coming of age. Prose's gorgeous writing and plotting make this an affecting and memorable novel.”
— Jeanne Regentin, Between the Covers, Harbor Springs, MI
View the List

Goldengrove is an emotionally powerful novel about adolescent love and loss from Francine Prose, the New York Times bestselling author of Reading Like a Writer and A Changed Man. Focusing on a young girl facing the consequences of sudden loss after the death of her sister, this masterful coming-of-age work is radiant with the possibility of summer and charged by the restless sexual tension of teenage life.

Praise For Goldengrove: A Novel…

“With perfect pitch and no trace of sentimentality, Prose . . . lands on the precise emotional key for this novel . . . allowing humor and compassion to seep through the cracks of an otherwise dark tale.”
— San Francisco Chronicle

“With a dazzling mix of directness and metaphor, Prose captures the centrifugal and isolating force of grief...Prose exquisitely renders her characters’ grief and bafflement.”
— Los Angeles Times

“Arguably, “Goldengrove” is her best book yet.”
— Seattle Times

“Prose locates the life force that gives her narrator the quirky, irreverent but undeniable sound of a survivor. . . . Prose is tremendously skilled.”
— Chicago Tribune

“Francine Prose’s new novel is a quiet, clear-eyed, sun-dappled eulogy to lost youth, and a youth lost. . . . [Prose is ] a keen chronicler of human emotion.”
— Elle

“A page-turner, thanks to its wholly identifiable, and perfectly flawed, young heroine. A-”
— Entertainment Weekly

“A poignant account of growing up amid sorrow...a tender and moving story of adolescent love.”
— Hartford Courant

“Prose holds up a mirror to grief and family life we can’t look away from, revealing their truths on page after page, in beautifully crafted writing.”
— Milwaukee Journal Sentinel

“Prose’s skillful rendering of the human ability to accept hard truths and move on is a poignant lesson for us all.”
— Miami Herald

“Insightful, lyrical... “Goldengrove” is beautifully and simply written...a moving portrait of the search for identity through a landscape of pain and loss.”
— St. Louis Post-Dispatch

“Prose creates characters with real flaws that make the reader both love and hate them. It is easy to put oneself in the position of any of the players...”
— Deseret Morning News