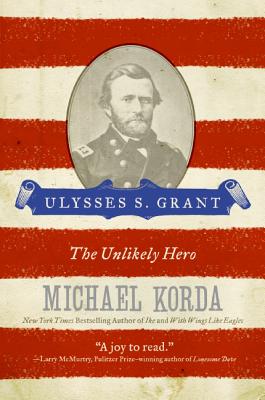 “Michael Korda has delivered a jewel of a short life of Ulysses S. Grant, a general deadly on the battlefield and unprepossessing off it. As a biographer Korda is Grant-like himself: unambiguous, decisive, clear. The book is a joy to read.”  --Larry McMurtry, Pulitzer Prize-winning author of Lonesome Dove

The first officer since George Washington to become a four-star general in the United States Army, Ulysses S. Grant was a man who managed to end the Civil War on a note of grace, and was the only president between Andrew Jackson and Woodrow Wilson to serve eight consecutive years in the White House. The son of an Ohio tanner, he has long been remembered as a brilliant general but a failed president whose second term ended in financial and political scandal. But now acclaimed, bestselling author Michael Korda offers a dramatic reconsideration of the man, his life, and his presidency. Ulysses S. Grant is an evenhanded and stirring portrait of a flawed leader who nevertheless ably guided America through a pivotal juncture in its history.

“Michael Korda has delivered a jewel of a short life of Ulysses S. Grant, a general deadly on the battlefield and unprepossessing off it. As a biographer Korda is Grant-like himself: unambiguous, decisive, clear. The book is a joy to read.”
— Larry McMurtry, Pulitzer Prize-winning author of Lonesome Dove

“In this compact, vivid biography of the Eisenhower of the American Civil War, Michael Korda distills Grant’s concentrated essence. His portraiture is incisive, his battle scenes superb.”
— Richard Rhodes, Winner of the Pulitzer Prize, a National Book Award and a National Book Critics Circle Award for The Making of the Atom Bomb

“Those whose only perception of Ulysses S. Grant is that of an all-but-forgotten Civil War general, an inept president, and a failed businessman would do well to read Michael Korda’s short but illuminating biography. Korda’s insightful reassessment of this ‘unlikely hero’ will change your view. He concludes that a greater understanding of how Grant confronted the watershed crises of his era has major relevance today as America wrestles with equally far-reaching military and political issues of a scope and importance not unlike those of the mid-nineteenth century.”
— Henry Kissinger

"Ulysses S. Grant was America’s very own anti-Napoleon: a general who hated war, a politician who served without charisma, a man of humility who eschewed myths about himself. Korda’s book is a telling of Grant’s life that is true to the thought and style of the subject: simple, clear, and deeply original. The sections comparing Grant to Ike or the recounting of the creation of Grant’s bestselling memoirs are worth the price of the book."
— Steven Englund, author of Napoleon, A Political Life

“I think you’ve got Grant just right: tender-hearted and remorseless, unpromising at the start, but then a natural commander, shy and vain, the archetypal little man achieving giant stature. Your description of him at the end is terrific!”
— Justin D. Kaplan Winner of the National Book Award and the Pulitzer Prize for Mr. Clemens and Mark Twain

“Korda’s volume is interested in investigating the psychology of one of the great Americans of the 19th century. He examines Grant’s successes and failures and shows the parts of his character that are evident in both. In doing so, he produces a gripping study of the man, operating successfully under the stresses of war, enduring failure in the stresses of peace, and coping with his fatal cancer. It is a broad, sweeping view of the man’s life...an admirable introduction to one of the great men of American history.”
— School Library Journal

“Lively and well-constructed. . . . An excellent introduction to an important American life.”
— Foreign Affairs

“Make[s] Grant, for all his taciturnity and shyness, a fascinating and major historical player.”
— Booklist

“Korda does about as good a job of bringing Grant to life as possible and handles all the essential set pieces—Grant as Mexican War officer, Civil War general, president and author of masterful memoirs on the eve of his death—with much skill.”
— Publishers Weekly