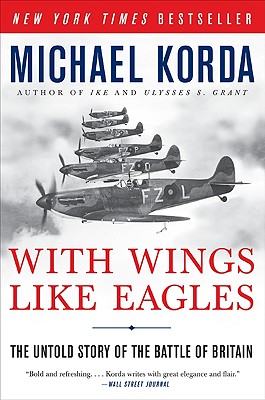 The Untold Story of the Battle of Britain

Michael Korda’s brilliant work of history takes the reader back to the summer of 1940, when fewer than three thousand young fighter pilots of the Royal Air Force—often no more than nine hundred on any given day—stood between Hitler and the victory that seemed almost within his grasp.

Korda recreates the intensity of combat in the “long, delirious, burning blue” of the sky above southern England and, perhaps, for the first time, traces the entire complex web of political, diplomatic, scientific, industrial, and human decisions that led inexorably to the world’s first, greatest, and most decisive air battle.

Winston Churchill memorable said about the Battle of Britain, “Never in the field of human conflict was so much owed by so many to so few.” Here is the story of “the few,” and how they prevailed against the odds, deprived Hitler of victory, and saved the world during three epic months in 1940.


Praise For With Wings Like Eagles: The Untold Story of the Battle of Britain…

“A skillful, absorbing, often moving contribution to the popular understanding of one of the few episodes in history to live on untarnished and undiminished in the collective memory and to deserve the description ‘heroic.’”
— Washington Post Book World

The Battle of Britain was one of the great transformative events of modern history, and Michael Korda’s stirring account of the campaign is an absolute masterpiece, written with power, intensity and tremendous fidelity to the historical record. It is a tour de force of storytelling and analysis,and a highly pleasurable read, as well, history in the grand style of the masters of the art.
— Donald L. Miller, author of Masters of the Air

“An excellent book. The writing is most rewarding, and Korda’s natural talent and experience as a storyteller have enabled him to bind all the disparate episodes into a gripping story. A formidable job, beautifully completed.”
— Len Deighton, author of The Ipcress File

Military historians face tough choices. Do they write about The Big Picture, with presidents and prime ministers making decisions with generals and admirals? Or do they write from the foxhole level, where The Big Picture extends only 300 meters to the front and flanks? . . . In looking back at World War II’s Battle of Britain in With Wings Like Eagles, historian Michael Korda tells the tale from all of the angles cited above. Not only does he make it work, he also keeps it terse. . . . With Wings Like Eagles tells their story superbly.
— St. Louis Post-Dispatch

“A natural pick for the WWII collection.”
— Booklist

“Books have been written about the Battle of Britain, but to me none is as interesting and informative as Michael Korda’s new With Wings Like Eagles."
— Tampa Tribune

“The book soars in those parts in which Korda describes how the British prepared for the war in the skies, or how the Germans failed time and again to deliver a knockout blow”.
— New York Times Book Review

“A worthy addition to the mounds of material on the battle that saved Britain and possibly much of the world.”
— San Antonio Express-News

"Regardless of whether you are one of the lucky few ever to have flown a Spitfire, or your parents not yet born in 1940, Michael Korda’s reliving of all the exhilaration, heroism, fear, and epochal significance of the ‘Battle of Britain’ will enthrall you. He restores the name of its principal architect, ‘Stuffy’ Dowding, to its proper pinnacle, and even has unexpected, but just, praise for Neville Chamberlain. His mastery of aero-technics is phenomenal, and no one can make an exciting, and complex, tale more understandable; quite simply the best book I have read this year."
— Sir Alistair Horne, C.B.E.