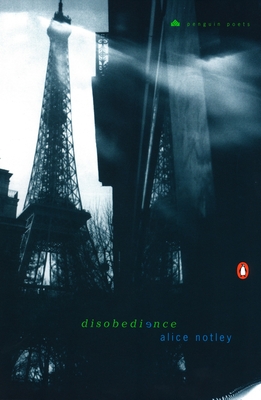 Alice Notley has earned a reputation as one of the most challenging and engaging radical female poets at work today. Her last collection, Mysteries of Small Houses, was a finalist for both the Pulitzer Prize in poetry and the Los Angeles Times Book Prize. Structured as a long series of interconnected poems in which one of the main elements is an ongoing dialogue with a seedy detective, Disobedience sets out to explore the visible as well as the unconscious. These poems, composed during a fifteen-month period, also deal with being a woman in France, with turning fifty, and with being a poet, and thus seemingly despised or at least ignored.

Alice Notley is a poet whose twenty previous titles include The Descent of Alette, Beginning with a Stain, Homer's Art, and Selected Poems. She wrote the introduction for her late first husband Ted Berrigan's Selected Poems. She lives in Paris.
Loading...
or support indie stores by buying on
(This book is on backorder)