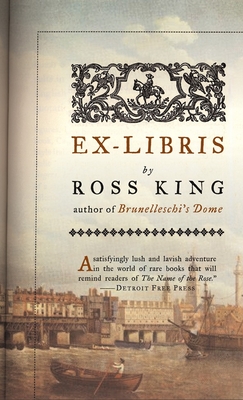 A cryptic summons to a remote country house launches Isaac Inchbold, a London bookseller and antiquarian, on an odyssey through seventeenth-century Europe. Charged with the task of restoring a magnificent library destroyed by the war, Inchbold moves between Prague and the Tower Bridge in London, his fortunes—and his life—hanging on his ability to recover a missing manuscript. Yet the lost volume is not what it seems, and his search is part of a treacherous game of underworld spies and smugglers, ciphers, and forgeries. Inchbold's adventure is compelling from beginning to end as Ross King vividly recreates the turmoil of Europe in the seventeenth century—the sacks of great cities; Raleigh's final voyage; the quest for occult knowledge; and a watery escape from three mysterious horsemen.

Ross King is the author of The Judgment of Paris, Brunelleschi's Dome, and Michelangelo and the Pope's Ceiling. He has twice won the Governor General's Award for Non-Fiction (for The Judgment of Paris and Leonardo and the Last Supper). Born and raised in Canada, King holds degrees from the University of Regina, York University, and University College, London. He now lives near Oxford, England.
Loading...
or support indie stores by buying on
(This book is on backorder)