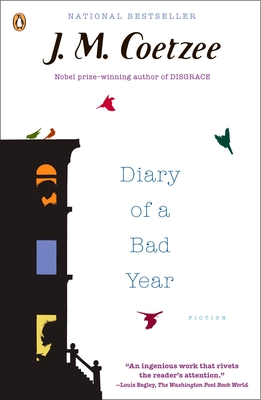 Diary of a Bad Year

Diary of a Bad Year takes on the world of politics—a new topic for Coetzee—and explores the role of the writer in our times with an extraordinary moral compass.

J.M. Coetzee once again breaks literary ground with Diary of a Bad Year, a book that is, in the words of its protagonist, a response to the present in which I find myself. Aging author Senor C has been commissioned to write a series of essays entitled Strong Opinions, of which he has many. After hiring a beautiful young typist named Anya, the two embark on a relationship that will have a profound impact on them both especially when Alan, Anya's no-good boyfriend, develops designs on Senor C's bank account. Told in these three voices simultaneously, Coetzee has created any entirely new way of telling a story, and nothing less than an involving, argumentative, moving novel (The New Yorker).