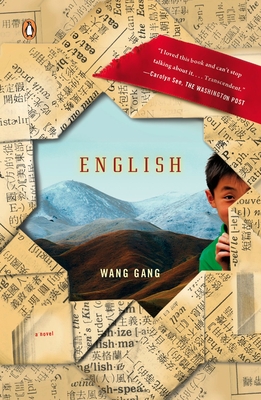 "I loved this book and can't stop talking about it. . . . Transcendent." —Carolyn See, The Washington Post

In the tradition of Balzac and the Little Chinese Seamstress, Wang Gang's English is a captivating coming-of-age novel about the power of language to launch a journey of self-discovery. When a new teacher—a tall, elegantly dressed man from Shanghai carrying an English dictionary under his arm—comes to Urumqi, the capital of China's far west region of Xinjiang, twelve-year-old Love Liu turns away from Chairman Mao's little red book and toward the teacher's big blue book for answers to his most pressing questions about love and life. But as a whole new world begins to open up for him, Love Liu must face a test more challenging than any he'll take in the classroom.

Praise For English: A Novel…

"Refreshing . . . Anyone who has dreamed for something bigger in life will relate to the story." —Lijia Zhang, The Wall Street Journal Asia

"Equally tender and searing . . . More than any other book I've read about Communist China, English conveys a sense of the time and place with clarity, authenticity and compassion."  —Tiffany Lee-Youngren, The San Diego Union-Tribune

"Deftly explores the politics of language during those treacherous times." —Travel + Leisure

"Its story-telling and its narrative are both straightforward and clear . . . allow[ing] the drama of the story to open up naturally, unpretentiously . . . and yet also to crescendo into a tour de force of a conclusion. . . . [The translators'] English—and their English—is as fluid and conversational as Wang Gang's Chinese."  —Rain Taxi

"A fascinating and loving portrait of a painful childhood full of fond memories [that] allows us to glimpse the humanity we all have in common. For that reason, the book does what good literature should always do." —The Quarterly Conversation

"A heart-wrenching coming-of-age story during one of the most tumultuous periods of modern history." —BookDragon

"This compelling coming-of-age novel . . . paints a vivid picture of what life was like during the Cultural Revolution, with paranoia, suspicion, and distrust informing every relationship, even the closest ones."
—Booklist

"The pure friendship between the teenage boy and his English teachers is movingly beautiful; the depiction of the intellectuals of that particular period cuts to the bone. I highly recommend it."
—Mo Yan, winner of the Nobel Prize in Literature

Wang Gang based English on his experiences growing up in the Xinjiang region in China's far west. He now lives in Beijing and is the author of a number of critically acclaimed novels as well as the screenplays for two enormously popular Chinese films. English is his first novel to be translated into English, and rights have been sold around the world.
Loading...
or
Not Currently Available for Direct Purchase