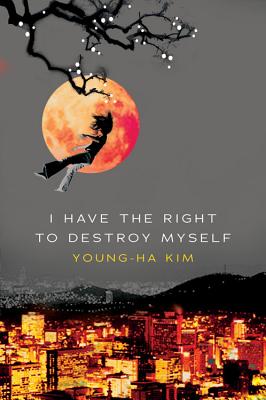 I Have The Right To Destroy Myself

In the fast-paced, high-urban landscape of Seoul, C and K are brothers who have fallen in love with the same woman—Se-yeon—who tears at both of them as they all try desperately to find real connection in an atomized world. A spectral, nameless narrator haunts the edges of their lives as he tells of his work helping the lost and hurting find escape through suicide. Dreamlike and beautiful, the South Korea brought forth in this novel is cinematic in its urgency and its reflection of contemporary life everywhere—far beyond the boundaries of the Korean peninsula.  Recalling the emotional tension of Milan Kundera and the existential anguish of Bret Easton Ellis, I Have the Right to Destroy Myself achieves its author’s greatest wish—to show Korean literature as part of an international tradition. Young-ha Kim is a young master, the leading literary voice of his generation.


Praise For I Have The Right To Destroy Myself…

PRAISE FROM KOREA FOR I HAVE THE RIGHT TO DESTROY MYSELF

"[Kim’s] novels are fragments of his amazing imagination. With uncommon creativity, grotesque images, and stories that build on and into each other like a computer game, he perplexes his readers as much as he delights them."—LEADERS KOREA literary magazine