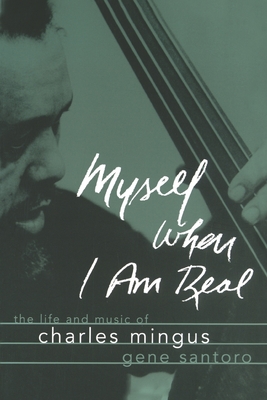 Myself When I Am Real

Charles Mingus was one of the most innovative jazz musicians of the 20th century, and ranks with Charles Ives and Duke Ellington as one of America's greatest composers. By temperament, he was a high-strung and sensitive romantic, a towering figure whose tempestuous personal life found powerfully coherent expression in the ever-shifting textures of his music. Now, acclaimed music critic Gene Santoro strips away the myths shrouding "Jazz's Angry Man," revealing Mingus as more complex than even his close friends knew. Written in a lively, novelistic style, Myself When I Am Real draws on dozens of new interviews and previously untapped letters and archival materials to explore the intricate connections between this extraordinary man and the extraordinary music he made.

A former Fulbright scholar, book editor, and musician, Gene Santoro is a music critic at the New York Daily News and columnist at The Nation and Chamber Music. The author of Dancing in Your Head and Stir It Up, he has written articles and essays for The Atlantic Monthly, The New York Times, The Village Voice, Spin, Rolling Stone, and Down Beat. He divides his time between New York City and Shokan, New York.
Loading...
or support indie stores by buying on