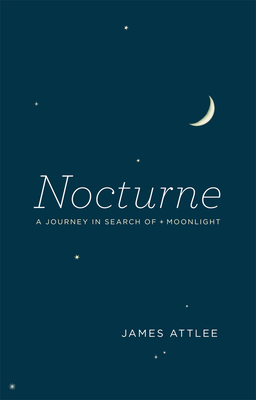 A Journey in Search of Moonlight

“Nobody who has not taken one can imagine the beauty of a walk through Rome by full moon,” wrote Goethe in 1787. Sadly, the imagination is all we have today: in Rome, as in every other modern city, moonlight has been banished, replaced by the twenty-four-hour glow of streetlights in a world that never sleeps. Moonlight, for most of us, is no more.

So James Attlee set out to find it. Nocturne is the record of that journey, a traveler’s tale that takes readers on a dazzling nighttime trek that ranges across continents, from prehistory to the present, and through both the physical world and the realms of art and literature. Attlee attends a Buddhist full-moon ceremony in Japan, meets a moon jellyfish on a beach in Northern France, takes a moonlit hike in the Arizona desert, and experiences a lunar eclipse on New Year’s Eve atop the snowbound Welsh hills. Each locale is illuminated not just by the moonlight he seeks, but by the culture and history that define it. We learn about Mussolini’s pathological fear of moonlight; trace the connections between Caspar David Friedrich, Rudolf Hess, and the Apollo space mission; and meet the inventors of the Moonlight Collector in the American desert, who aim to cure all kinds of ailments with concentrated lunar rays. Svevo and Blake, Whistler and Hokusai, Li Po and Marinetti are all enlisted, as foils, friends, or fellow travelers, on Attlee’s journey.

Pulled by the moon like the tide, Attlee is firmly in a tradition of wandering pilgrims that stretches from Basho to Sebald; like them, he presents our familiar world anew.


Praise For Nocturne: A Journey in Search of Moonlight…

"[R]ambling . . . charming . . . spellbinding. . . . As we reel through Attlee’s idiosyncratic investigation of his subject—with detours that discuss Mussolini, the Madonna, the Victorian painter Samuel Palmer—he provides a magpie assortment of facts. . . . Modern man, in Attlee’s view, has done his best to ignore moonlight. And man will continue to vanquish it—at least until the power runs out. Attlee makes us question such folly. His journey has no final destination, just many stops along a path that could—and should—unwind for a lifetime. In this way, Nocturne is an inspiration. It makes you want to pull a chair out into the garden and bathe in the moonlight. No questions asked."

"Attlee is a true enthusiast, and is fascinated by, indeed loves, his subject. He writes beautifully and often thrillingly about the moon in all its--her?--aspects, and it will be a dull-minded reader who comes away from this book without a new or at least renewed regard for the extraordinary, silver satellite that is our world's constant companion"
— John Banville

"One of the things that strikes you is how much pleasure Attlee, an aesthete, amateur astronomer and connoisseur, takes from simply looking. . . . Attlee has a considerable talent for capturing the thrill of historical moments. . . . But Nocturne becomes more than a series of loosely woven vignettes. Attlee's observations of the night sky take on a cumulative weight, forming a kind of guide for good living on Earth: late night walks, the pleasures of looking, the spectacular and forgotten thrills of natural phenomena, how we might find profound pleasure in the here and now we have overlooked."
— Adam O'Riordan

"One would be hard-pressed to find a better tour guide than English writer James Attlee. On his global quest for moonlight, he has a gentle sense of humor and an even temper when clouds and rain botch his well-laid plans. Best of all, he is perpetually illuminating about what the moon has meant to humans through the centuries."

"Attlee is a congenial writer, consistently readable, erudite yet modest. . . . Nocturne is never less than absorbing: moonlight may be tenuous stuff but there's a lot of matter here."
— Financial Times

"In twenty-five short essays, Nocturne charts Attlee's quest to rediscover the moon, not only through travel, but also through mysticism, literature, and art. . . . Nocturne is a trove of poetic descriptions."
— Bookforum

"A stellar appreciation for the myriad quantifiable and amorphous attributes that have made the moon a source of magic and wonder through the ages."

"Nocturne is an enchanting moonlit sojourn born of wisdom and celestial wonder."

— A. Roger Ekirch, author of At Day’s Close: Night in Times Past

"Nocturne is a charming book, filled with hundreds and thousands of facts and stories about the moon, not one of which we really need to know but nearly all of which are fascinating. As a result we close the book enriched, with a pocket full of change we can spend wherever we want."

“This is a winner of a book. A luminous meditation on moon-glow and moon-glade and the sub-lunar landscape seen only by glimmer-struck savants.”

"Nocturne is a compendious, moving and impassioned guide to the heavenly body that its author calls, in a perfect metaphor, the 'Garbo of the skies.'"
— Irish Times

James Attlee works in art publishing in London and is the author of Isolarion and coauthor of Gordon Matta-Clark: The Space Between.