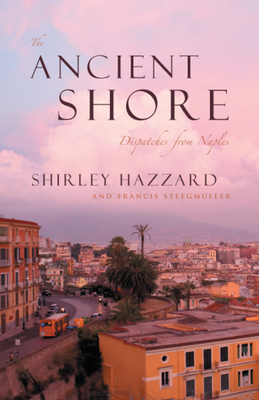 Born in Australia, Shirley Hazzard first moved to Naples as a young woman in the 1950s to take up a job with the United Nations. It was the beginning of a long love affair with the city. The Ancient Shore collects the best of Hazzard’s writings on Naples, along with a classic New Yorker essay by her late husband, Francis Steegmuller. For the pair, both insatiable readers, the Naples of Pliny, Gibbon, and Auden is constantly alive to them in the present.

With Hazzard as our guide, we encounter Henry James, Oscar Wilde, and of course Goethe, but Hazzard’s concern is primarily with the Naples of our own time—often violently unforgiving to innocent tourists, but able to transport the visitor who attends patiently to its rhythms and history. A town shadowed by both the symbol and the reality of Vesuvius can never fail to acknowledge the essential precariousness of life—nor, as the lover of Naples discovers, the human compassion, generosity, and friendship that are necessary to sustain it.

Beautifully illustrated by photographs from such masters as Henri Cartier-Bresson and Herbert List, The Ancient Shore is a lyrical letter to a lifelong love: honest and clear-eyed, yet still fervently, endlessly enchanted.

“Much larger than all its parts, this book does full justice to a place, and a time, where ‘nothing was pristine, except the light.’”—Bookforum

“Deep in the spell of Italy, Hazzard parses the difference between visiting and living and working in a foreign country. She writes with enormous eloquence and passion of the beauty of getting lost in a place.”—Susan Slater Reynolds, Los Angeles Times


Praise For The Ancient Shore: Dispatches from Naples…

“[An] exquisite companion for the armchair traveler who dreams in the languages of literature and art. . . . A love letter to an ancient Italian city by the sea. . . . By temperament, I incline toward the understated appreciations of art and people I find in The Ancient Shore. . . . Such passages, simple as they are, constitute the unalloyed traces of love.”

“Much larger than all its parts, this book does full justice to a place, and a time, where ‘nothing was pristine, except the light.’”

"This book speaks in two different voices, Hazzard writing about the city of Naples as a 'victim' of the still-active Mount Vesuvius, about why sensitive people gravitate to Italy, and about travel as a personal pilgrimate. [Her late husband Francis] Steegmuller, on the other hand, writes more personally, about a mugging he experienced in crime-prone Naples a few years back. But the two voices join in exquisite harmony to celebrate 'those of us who first came to Italy in the 1950s [and] were more than lucky; we were blessed.' Blessed, that is, with indelible impressions, for 'the day was an adventure of discoveries, mortal and immortal, inward or external, and occasionally somber.' A lovely book."
— Booklist

“The Ancient Shore reads like an extended prose poem about one of the most beautiful and complex, yet also one of the least well known, cities in the world. Without ever removing the veils of enigma that surround Naples, Shirley Hazzard and her late husband Francis Steegmuller take us to the heart of the city’s historical, cultural, and aesthetic fascination. As we join them on this pilgrimage, they invite us to meditate on the deeper meaning of travel, hospitality, encounter, and expatriation. Even for those of us who think we know Naples well, this book takes us someplace we have not been before.”

“Deep in the spell of Italy, Hazzard parses the difference between visiting and living and working in a foreign country. She writes with enormous eloquence and passion of the beauty of getting lost in a place.”

"Over those like Shirley Hazzard and her late husband Francis Steegmuller, who arrived immediately after hte Second World War, Naples spread a numinous enchantment which no other Italian city could match.Sadly the collection of brief essays and memoirs gathered here may represent the last in that small but significant array of books which have sought to capture this unique impact on foreign visitors. . . . Hazzard and Steegmuller insist that 'our own readiness to be pleased can never be mocked or repudiated.' Few readers would wish to do either,  given the refinement and affetion with which both writers register their experience."
— Jonathan Keates

"[Hazzard's notions of Naples are] limned gorgeously--by her painterly prose, her late husband's stylish reportage, and a somewhat unexpected (but thoroughly apt) complement: glowing photographs of Naples by Henri Cartier-Bresson, Herbert List, and others."
— Atlantic

"For anyone planning to visit Naples, not to read Ancient Shores would itself be a crime. It could help you fall in love with the city, as Hazzard and her husband had done."
— Michael Hanlon

“A beautifully written apologia for Naples and the Campania region. . . . Hazzard’s writing is an often brilliant travelogue in which the reader is made to recognize what he or she may have missed in the elusive city.”

"A book you don't so much read as inhale. . . . A perfect present as a thank-you to a dinner host or to anyone passionate about Italy."
— Ann Geracimos

Francis Steegmuller (1906–94) was an editor, translator, critic, and literary biographer.
Loading...
or
Not Currently Available for Direct Purchase