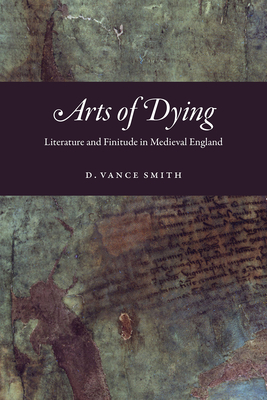 Literature and Finitude in Medieval England

People in the Middle Ages had chantry chapels, mortuary rolls, the daily observance of the Office of the Dead, and even purgatory—but they were still unable to talk about death. Their inability wasn’t due to religion, but philosophy: saying someone is dead is nonsense, as the person no longer is. The one thing that can talk about something that is not, as D. Vance Smith shows in this innovative, provocative book, is literature.

Covering the emergence of English literature from the Old English to the late medieval periods, Arts of Dying argues that the problem of how to designate death produced a long tradition of literature about dying, which continues in the work of Heidegger, Blanchot, and Gillian Rose. Philosophy’s attempt to designate death’s impossibility is part of a literature that imagines a relationship with death, a literature that intensively and self-reflexively supposes that its very terms might solve the problem of the termination of life. A lyrical and elegiac exploration that combines medieval work on the philosophy of language with contemporary theorizing on death and dying, Arts of Dying is an important contribution to medieval studies, literary criticism, phenomenology, and continental philosophy.


Praise For Arts of Dying: Literature and Finitude in Medieval England…

“Arts of Dying went to press in spring 2019 and appeared in April 2020, making it a prescient, disquieting book. Smith covers five hundred years of English literature, from Aelfric in the tenth century to Audelay in the 15th, and his philosophical range is wide, extending from medieval terminist logic and the Oxford Calculators to Kant, Hegel, Heidegger, Derrida and Blanchot. He is especially taken with Heidegger’s idea of Songe or care, as Sein zum Tode—being-towards-death. Such orientation builds a bridge between medieval preoccupation with ars moriendi, the craft of dying, and the existentialist conviction that authentic freedom comes from living in the face of death.”
— LRB

"Smith continues to draw on his background in ethnography and 20th-century philosophy as he analyzes medieval texts in a wide range of literary forms, from less-known lyric and tomb inscription to narrative imagery and characterization. His insights are informed by Maurice Blanchot’s extensive work on literature and dying, but he treats the fundamentally different thought world of medieval writers as something of a counterpoint approach to the problem of death. . . . Summing Up: Recommended."
— CHOICE

“Death is a sophism: we are never in death, only dying all the time. Hence death is work. In this supremely astute, readable, and intelligent book, Smith studies the work of death in Old English poetry and medieval logic, showing how these poets’ and thinkers’ insights about the separation of soul from body, entombment in a crypt, or dispersal in an archive of mourning fully anticipate the analyses of Hegel, Freud, Heidegger, Blanchot, and Derrida. A true feast for thought!"
— Jean-Michel Rabaté, University of Pennsylvania

“Arts of Dying is an ambitious study that offers a philosophically and theoretically driven analysis of the treatment of death and dying in a wide range of Old and Middle English texts. Death, as they say, is one of the two great topics of all literature, but Smith offers a compelling and highly original treatment of it. The book is positively breathtaking and provides new and important insights throughout.”
— Larry Scanlon, author of Narrative, Authority, and Power: The Medieval Exemplum and the Chaucerian Tradition

"Arts of Dying explores how medieval writers transformed the individual experience that we must all face alone into a collective one shared across every level of society. Immensely learned, gracefully written, and philosophically agile, it shows us that death is just as much a linguistic act as a physical one. How do we talk about something that has not yet happened to us and about which, once it does, we cannot speak? In focusing on the long now of ‘dying’ rather than the discrete moment of death, Smith documents how these writers handled a tricky temporal problem: the narration of finitude before the end has been reached. This is intellectual history at its best, a poignant project that returns to medieval literature as a place from which to rethink our modern attitudes about death as well as the limits of knowledge."
— Kellie Robertson, author of Nature Speaks: Medieval Literature and Aristotelian Philosophy

D. Vance Smith is professor of English and former Director of Medieval Studies at Princeton University. He is the author of four books, most recently, Arts of Possession: The Middle English Household Imaginary.