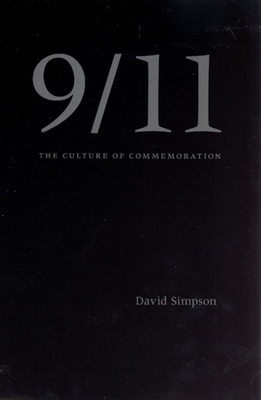 The Culture of Commemoration

After the terrorist attacks of September 11, 2001, a general sense that the world was different—that nothing would ever be the same—settled upon a grieving nation; the events of that day were received as cataclysmic disruptions of an ordered world. Refuting this claim, David Simpson examines the complex and paradoxical character of American public discourse since that September morning, considering the ways the event has been aestheticized, exploited, and appropriated,  while “Ground Zero” remains the contested site of an effort at adequate commemoration.

In 9/11, Simpson argues that elements of the conventional culture of mourning and remembrance—grieving the dead, summarizing their lives in obituaries, and erecting monuments in their memory—have been co-opted for political advantage. He also confronts those who labeled the event an “apocalypse,” condemning their exploitation of 9/11 for the defense of torture and war.

In four elegant chapters—two of which expand on essays originally published in the London Review of Books to great acclaim—Simpson analyzes the response to 9/11: the nationally syndicated “Portraits of Grief” obituaries in the New York Times; the debates over the rebuilding of the World Trade Center towers and the memorial design; the representation of American and Iraqi dead after the invasion of March 2003, along with the worldwide circulation of the Abu Ghraib torture photographs; and the urgent and largely ignored critique of homeland rhetoric from the domain of critical theory.

Calling for a sustained cultural and theoretical analysis, 9/11 is the first book of its kind to consider the events of that tragic day with a perspective so firmly grounded in the humanities and so persuasive about the contribution they can make to our understanding of its consequences.

David Simpson is the G. B. Needham Distinguished Professor of English at the University of California, Davis.