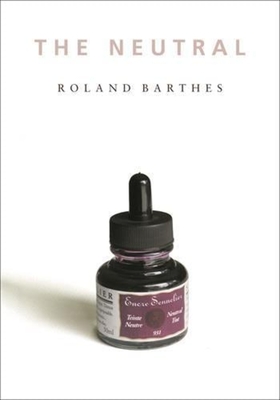 "I define the Neutral as that which outplays the paradigm, or rather I call Neutral everything that baffles paradigm." With these words, Roland Barthes describes a concept that profoundly shaped his work and was the subject of a landmark series of lectures delivered in 1978 at the Coll ge de France, just two years before his death. Not published in France until 2002, and appearing in English for the first time, these creative and engaging lectures deepen our understanding of Roland Barthes's intellectual itinerary and reveal his distinctive style as thinker and teacher.

The Neutral (le neutre), as Barthes describes it, escapes or undoes the paradigmatic binary oppositions that structure and produce meaning in Western thought and discourse. These binaries are found in all aspects of human society ranging from language to sexuality to politics. For Barthes, the attempt to deconstruct or escape from these binaries has profound ethical, philosophical, and linguistic implications.

The Neutral is comprised of the prewritten texts from which Barthes lectured and centers around 23 "figures," also referred to as "traits" or "twinklings," that are possible embodiments of the Neutral (sleep, silence, tact, etc.) or of the anti-Neutral (anger, arrogance, conflict, etc.). His lectures draw on a diverse set of authors and intellectual traditions, including Lao-tzu, Tolstoy, German mysticism, classical philosophy, Rousseau, Baudelaire, Walter Benjamin, and John Cage. Barthes's idiosyncratic approach to his subjects gives the lectures a playful, personal, and even joyous quality that enhances his rich insights.

In addition to his reflections on a variety of literary and scholarly works, Barthes's personal convictions and the events of his life shaped the course and content of the lectures. Most prominently, as Barthes admits, the recent death of his mother and the idea of mourning shape several of his lectures.

Roland Barthes was one of the most influential critics and philosophers of the twentieth century. His works include Mythologies, S/Z, A Lover's Discourse, and Camera Lucida. Rosalind Krauss is University Professor of Modern Art and Theory at Columbia University. She is the author of The Optical Unconscious, Formless: A User's Guide, The Picasso Papers, and Bachelors, among other works. Denis Hollier is Professor of French Literature at New York University. He is the editor of A New History of French Literature and the author of Absent Without Leave: French Literature Under the Threat of War.
Loading...
or support indie stores by buying on