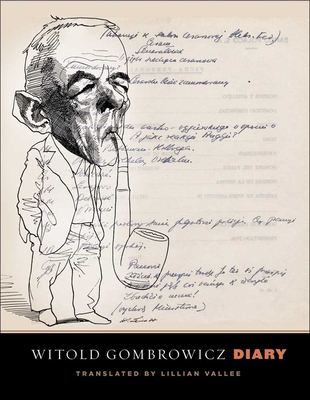 Just before the outbreak of World War II, young Witold Gombrowicz left his home in Poland and set sail for South America. In 1953, still living as an expatriate in Argentina, he began his Diary with one of literature's most memorable openings:
"Monday
Me.
Tuesday
Me.
Wednesday
Me.
Thursday
Me."


Gombrowicz's Diary grew to become a vast collection of essays, short notes, polemics, and confessions on myriad subjects ranging from political events to literature to the certainty of death. Not a traditional journal, Diary is instead the commentary of a brilliant and restless mind. Widely regarded as a masterpiece, this brilliant work compelled Gombrowicz's attention for a decade and a half until he penned his final entry in France, shortly before his death in 1969.

Long out of print in English, Diary is now presented in a convenient single volume featuring a new preface by Rita Gombrowicz, the author's widow and literary executor. This edition also includes ten previously unpublished pages from the 1969 portion of the diary.


Praise For Diary (The Margellos World Republic of Letters)…

"Ferdydurke is certainly a spontaneous work, but the Diary is even more so, and . . . even more rewarding."—John Bayley, New York Review of Books
— John Bayley

“Having this book in my hands, I felt a joy at the thought that strong personalities, like that of Gombrowicz, sooner or later find recognition thanks to the sheer intensity of their existence.”—Czeslaw Milosz, New York Times
— Czeslaw Milosz

“If ever a life demanded a diary, this was one.”—Paul West, Washington Post

"Yale University Press by reprinting in a beautiful fat paperback an up-dated complete edition of the Diaries of Witold Gombrowicz has done a singular important, essential and remarkable job."—Thomas McGonigle, ABC of Reading
— Thomas McGonigle

“The spiky brilliance and episodes of vivid experience that share the pages of the Diary with essay-length reflections give the collection as a whole a restive, fugitive rhythm. . . . A provocative experience.”—Eric Banks, Bookforum
— Eric Banks

Witold Gombrowicz (1904–1969) was a Polish-born writer of novels, short stories, and plays. His works have been translated into more than thirty languages. Lillian Vallee, an instructor at Modesto Junior College, is an award-winning translator of literature from the Polish.
Loading...
or
Not Currently Available for Direct Purchase