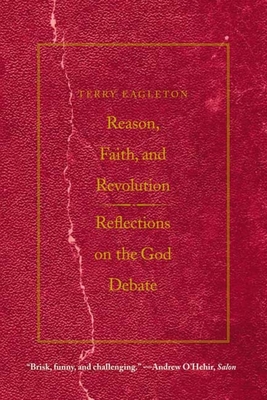 Reflections on the God Debate (The Terry Lectures Series)

Terry Eagleton’s witty and polemical Reason, Faith, and Revolution is bound to cause a stir among scientists, theologians, people of faith and people of no faith, as well as general readers eager to understand the God Debate. On the one hand, Eagleton demolishes what he calls the “superstitious” view of God held by most atheists and agnostics and offers in its place a revolutionary account of the Christian Gospel. On the other hand, he launches a stinging assault on the betrayal of this revolution by institutional Christianity.

There is little joy here, then, either for the anti-God brigade—Richard Dawkins and Christopher Hitchens in particular—nor for many conventional believers. Instead, Eagleton offers his own vibrant account of religion and politics in a book that ranges from the Holy Spirit to the recent history of the Middle East, from Thomas Aquinas to the Twin Towers.


Praise For Reason, Faith, and Revolution: Reflections on the God Debate (The Terry Lectures Series)…

“Brisk, funny, and challenging . . . . One of the most fascinating, most original and prickliest works of philosophy to emerge from the post-9/11 era.”—Andrew O’Hehir, Salon

"There are plenty of things in this book to anger all sorts of people, and few will not find something in it with which to disagree strongly. And that''s just fine. This is an exceptional contribution to recent debates around faith, religion, and atheism."—Dale B. Martin, Yale University
-Dale B. Martin

"This is sure to ruffle feathers on both sides of the God debate. Eagleton offers his own polemical chronicle of religion and politics from the Holy Spirit to the Twin Towers. Many will, simply, have to read this." — The Bookseller

"Eagleton is that rarity, a non-ideological Marxist with a keen understanding of and sympathy for the human condition, not to mention an informed as well as sharp sense of humor. Serious Christians may be his most appreciative readers."—Booklist (starred review)

“This is sure to ruffle feathers on both sides of the God debate. Eagleton offers his own polemical chronicle of religion and politics from the Holy Spirit to the Twin Towers. Many will, simply, have to read this.” - Bookseller


"The book is superb. Provocative. And, it''s easy to overlook this particular new book among the heaps of mystery novels and other best sellers at bookstores, so grab a copy now."—Readthespirit.com

"His is a radical contribution to what is becoming one of the most important issues of our age."—Good Book Guide

"…[a] gloriously rumbustious counter-blast to Dawkinsite atheism…paradoxes sparkle throughout this coruscatingly brilliant polemic…. Eagleton is stronger on reason than Ditchkins, for he thinks carefully about what his opponents say…. This is, then, a demolition job which is both logically devastating and a magnificently whirling philippic.… It is easy to see why a lot of people will not be happy with this book. Much of what it says is too true.”—Paul Vallely, The Independent

"Eagleton…is a powerful and engaging writer, perhaps no more so than when, with bursts of comic vituperation which recall Kenneth Tynan at his best, he is seeing off those he regards as second-rate opponents. But probably more relevant is the sense among many readers and critics that Eagleton is providing a welcome antidote to the rather simple-minded conception of religion that Dawkins and Hitchens selected for their demolition jobs. He is rather like a wise old schoolmaster explaining to two eager young students that the significance of Hamlet is hardly exhausted by describing it as ‘a revenge drama’.”—Laurie Taylor, New Humanist Magazine

"Eagleton’s book began as a series of lectures delivered at Yale University. They must have been a riot…. He’s fantastically rude all round, about ''Ditchkins,'' about religion itself, which ''has wrought untold misery in human affairs''…. It’s terrific polemic."—Melanie McDonagh, Evening Standard

"Terry Eagleton’s intervention into the debate sparked by Richard Dawkins’s The God Delusion is, by turns, thought-provoking, infuriating, inspiring and very, very funny."—London Review of Books

“[B]etter than any previous book of its kind.”—James Wood, The New Yorker
-James Wood

"Terry Eagleton is at his best as a critic, and much of the book, which is really a series of lectures delivered at Yale University, is devoted to incisive and angry analyses of what is wrong with our world in the twenty-first century."—Benjamin Beit-Hallahmi, Metapsychology Online Reviews
-Benjamin Beit-Hallahmi

‘A boisterous polemic … Eagleton yields to none in his denunciation of institutional Christianity and a punitive, vengeful God as a betrayal of Jesus’s championing of the poor and rejected.’
-Jonathan Benthall

“Eagleton writes with lucidity, wit and panache and, though an atheist himself, successfully shreds what the conflated Ditchkins say in their books.”
-Piers Paul Read

Eagleton''s book "meets the challenge of the New Atheists with a sense of playfulness (for example, he melds the two leading lights of the movement, Richard Dawkins and Christopher Hitchens, into one signifier, "Ditchkins"), and a dogged refusal to let Oxbridge-trained rhetoric stand in for actual reason. The result is a work bathed in wit and punctuated with soaring prose that, while sympathetic to religious truth-claims, ends with a flourish on his Marxist hopes for an embrace of "tragic humanism.""—Lyndon Shakespeare, Anglican Theological Review
-Lyndon Shakespeare

"Eagleton is an unconventional and entertaining thinker.  His book is as much about capitalism, politics, and literary criticism as it is about religion." —Kurt Kleiner, The Globe and Mail
-Kurt Kleiner

"[Eagleton''s] gleeful, often satirical, piercing of the chinks in the armor of modern atheist apologetics is beneficial to any reader interested in the ''God Debate.''" —James Heiser, thenewamerican.com
-James Heiser

"Terry Eagleton''s wonderfully accessible critique . . . is written with his characteristic wit and erudition. . . . Eagleton writes very much from the Catholic Left, but his arguments will both enrich and challenge neocalvinist thought in politics, theology, and international relations." —Comment Magazine

"Reason, Faith, and Revolution is a challenging, feisty contribution to the current public debate about God and religion.  It is poetic, wise,and clear.  Eagleton proves he is more than a literary critic; he''s also an exceptional preacher." —Kurt Armstrong, Christian Week
-Kurt Armstrong

"This is a good and stimulating reading for theologians, and invites in a provocative way to think about theology''s identity and mission in times of deep changes and challenges." —Lluis Oviedo, Religion & Theology
-Lluis Oviedo

''Eagleton is one of Britain''s leading literary critics and writes with verve and humour.'' — Paul Goodliff, Baptist Times
-Paul Goodliff

"Eagleton''s book is a brisk and welcome contribution to the ongoing discussion about the place of religion in the world today. Readers will find plenty to challenge them in this brief snapshot of today''s ''God Debate.''"-- Blair Dee Hodges, Association for Mormon Letters

"A fascinating series of essays."—Financial Times

“There is a great deal here that readers from different backgrounds will find informative. It is a polemical book, but the deeper sense of the polemic is the subtle and multi-formed argument that what is at stake here, in the distinction between religious and secularist values, is actually a way of being alive. As Eagleton powerfully states, faith is never about the superficial use of reason.”—Oliver Davies, Scottish Bulletin on Evangelical Theory
-Oliver Davies

“Terry Eagleton has a deserved reputation as one of the most influential of British literary critics and cultural commentators who has developed over his many publications a highly effective communicative style. This book is no exception.”—Oliver Davies, Scottish Bulletin of Evangelical Theory
-Oliver Davies