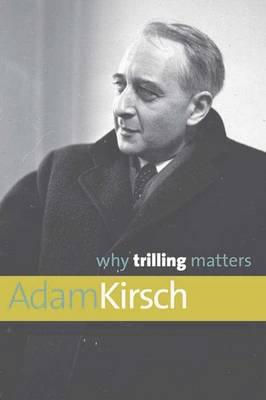 Lionel Trilling, regarded at the time of his death in 1975 as America’s preeminent literary critic, is today often seen as a relic of a vanished era. His was an age when literary criticism and ideas seemed to matter profoundly in the intellectual life of the country. In this eloquent book, Adam Kirsch shows that Trilling, far from being obsolete, is essential to understanding our current crisis of literary confidence—and to overcoming it.

By reading Trilling primarily as a writer and thinker, Kirsch demonstrates how Trilling’s original and moving work continues to provide an inspiring example of a mind creating itself through its encounters with texts. Why Trilling Matters introduces all of Trilling’s major writings and situates him in the intellectual landscape of his century, from Communism in the 1930s to neoconservatism in the 1970s. But Kirsch goes deeper, addressing today’s concerns about the decline of literature, reading, and even the book itself, and finds that Trilling has more to teach us now than ever before. As Kirsch writes, “Trilling’s essays are not exactly literary criticism” but, like all literature, “ends in themselves.”


Praise For Why Trilling Matters (Why X Matters Series)…

“Why Trilling Matters is not simply the best book yet written on Lionel Trilling. Its subject . . . is the pretext for an invigorating magic trick. With Trilling’s help, Kirsch transforms a backward glance into a forward step.”—Michael Kimmage, New York Times Book Review
— Michael Kimmage

"If any contemporary mind can be said to be Lionel Trilling’s inheritor and indispensable successor, both in imaginative breadth and cultural comprehensiveness, it is Adam Kirsch. As Matthew Arnold served Trilling, so does Trilling serve Kirsch—as a model of literary and humanist heroism. And though Kirsch arrives on the scene some three generations afterward, he sees into the older critic’s complex, strenuous, yet unassuming sensibility as no one before him has succeeded in doing. Why Trilling Matters is a small but elastic masterwork that enlarges, with crucial immediacy, our own understanding of why literature itself must matter."—Cynthia Ozick
— Cynthia Ozick

"This is a masterful book by a carefully attentive critic in close touch with his subject. Kirsch stresses the dialectical, experiential character of Trilling's writing, his perpetual shifting dialogue with himself and his times. A splendid and genuinely illuminating piece of work."—Morris Dickstein, author of Dancing in the Dark: A Cultural History of the Great Depression
— Morris Dickstein

"Adam Kirsch has given us an inspiring invitation to the life of alert freedom that Lionel Trilling showed literature enables, a life of questioning the self in order to become one."—Mark Lilla, Columbia University
— Mark Lilla

"This finely reflective reconsideration of Trilling argues persuasively for his enduring relevance, not as an interpreter of literature but as a critic forging a self through the restless engagement with literature."—Robert Alter, author of Pen of Iron: American Prose and the King James Bible
— Robert Alter

“In the compass of a short book, Kirsch manages to convey the spirit of [Trilling’s] writings . . . giving his work the same kind of subtle and nuanced reading that Trilling gave to others.”—Gertrude Himmelfarb, New Criterion
— Gertrude Himmelfarb

"In Why Trilling Matters, Kirsch has turned his considerable gifts to the mind he most resembles in comprehensive literary and cultural understanding. . . . Lionel Trilling, like Adam Kirsch himself, illustrates that reading deeply and wisely is not a credential for critics only, but everyone’s last best hope of being better."—William Giraldi, The Daily Beast
— William Giraldi

"Remarkable . . . Adam Kirsch has brought [Trilling] back to us with a balance that his subject would appreciate.”—Alan Cooper, Jewish Book World
— Alan Cooper

“One of the central insights of Adam Kirsch’s thoughtful and unusual little book is that Trilling was more concerned than most critics have been with what certain sorts of literature do for their readers.”—Stefani Collini, New Statesman
— Stefani Collini

“Adam Kirsch’s clear-headed book about the esteemed American critic Lionel Trilling comes at a propitious time. . . . the volume suggests Trilling’s writing could be of use in refurbishing criticism today and in the future.”—Bill Marx, Arts Fuse
— Bill Marx

"[T]o read Kirsch is to be brought into the dialogue between literature and its best readers . . . The best critics help us understand and even shape our own characters. Like Trilling. Like Kirsch."—David Wolpe, The Jewish Journal
— David Wolpe

“In setting out to demonstrate that Trilling still matters, Kirsch is asserting the value of literature and a literary culture. If Trilling thought and wrote, frequently, about the relation of literature to society, it was because, like Matthew Arnold on whom he “modelled himself in certain ways”, he saw in literature the necessary and most penetrating criticism of society, of “the way we live now”.”—Alan Massie, Times Literary Supplement
— Alan Massie

“Adam Kirsch, a poet, literary critic and senior editor at The New Republic, thinks that we have lost something valuable with the passing of Trilling and his generation, and has written a compact, engrossing book to make his case.”—Ian Marcus Corbin, Wall Street Journal (Europe)
— Ian Marcus Corbin

“[A] welcome book . . . [that] makes abundantly clear it is still possible to pick up and read Trilling—as Leavis once said about a poem of Donne’s—‘as we read the living.’”—William H. Pritchard, Hudson Review
— William H. Pritchard

Adam Kirsch is a senior editor at the New Republic and a columnist for Tablet magazine. He is the author of several books of poetry and criticism, and most recently of a short biography of Benjamin Disraeli. He lives in New York City.