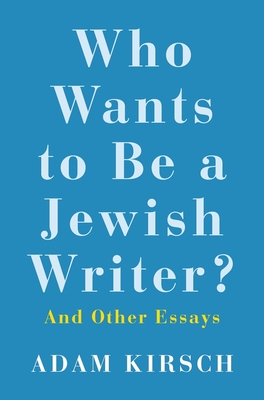 Who Wants to Be a Jewish Writer?

From one of today’s keenest critics comes a collection of essays on poetry, religion, and the connection between the two

Adam Kirsch is one of today’s finest literary critics. This collection brings together his essays on poetry, religion, and the intersections between them, with a particular focus on Jewish literature. He explores the definition of Jewish literature, the relationship between poetry and politics, and the future of literary reputation in the age of the internet. Several essays look at the way Jewish writers such as Stefan Zweig and Isaac Deutscher, who coined the phrase “the non‑Jewish Jew,” have dealt with politics. Kirsch also examines questions of spirituality and morality in the writings of contemporary poets, including Christian Wiman, Kay Ryan, and Seamus Heaney. He closes by asking why so many American Jewish writers have resisted that category, inviting us to consider “Is there such a thing as Jewish literature?”


Praise For Who Wants to Be a Jewish Writer?: And Other Essays…

“Kirsch interrogates some of the very basic assumptions of the American Jewish mainstream with love and with firmness.”—Jesse Bernstein, Jewish Exponent

“Throughout these thoughtful and graceful pieces, Kirsch devotes considerable attention to the diversity and complexity of American Jewish fiction, but his real interest is the interface between literature and religion throughout the Western canon . . . His work reflects a keen appreciation of the diversity of literature and a sharp critical mind.”—Kathryn Ruth Bloom, On the Seawall

“Adam Kirsch is one of today’s finest literary critics This collection brings together his essays on poetry, religion, and the intersections between them, with a particular focus on Jewish literature.”—Tradition online

“From one of our most distinguished public intellectuals and an indispensable voice on matters literary and spiritual, Adam Kirsch’s collection of essays on poetry and religion shows him at his very best.”—David Mikics, author of Slow Reading in a Hurried Age

Adam Kirsch is a regular contributor to the Atlantic and the New Yorker, and the author of ten books, including The People and the Books: 18 Classics of Jewish Literature and Why Trilling Matters. He lives in New York City.
Loading...
or
Not Currently Available for Direct Purchase