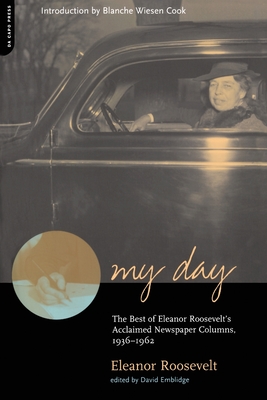 "I think Eleanor Roosevelt has so gripped the imagination of this moment because we need her and her vision so completely. . . . She's perfect for us as we enter the twenty-first century. Eleanor Roosevelt is a loud and profound voice for people who want to change the world." -- Blanche Wiesen Cook

Named "Woman of the Century" in a survey conducted by the National Women's Hall of Fame, Eleanor Roosevelt wrote her hugely popular syndicated column "My Day" for over a quarter of that century, from 1936 to 1962. This collection brings together for the first time in a single volume the most memorable of those columns, written with singular wit, elegance, compassion, and insight -- everything from her personal perspectives on the New Deal and World War II to the painstaking diplomacy required of her as chair of the United Nations Committee on Human Rights after the war to the joys of gardening at her beloved Hyde Park home. To quote Arthur Schlesinger, Jr., "What a remarkable woman she was! These sprightly and touching selections from Eleanor Roosevelt's famous column evoke an extraordinary personality."

"My Day reminds us how great a woman she was." --Atlanta Journal-Constitution

Eleanor Roosevelt (1884-1962) was an American politician, diplomat, and activist. She was the longest-serving First Lady of the United States, holding the post from March 1933 to April 1945. She made Gallup's list of "People that Americans Most Widely Admired in the 20th Century," and Time's "The 25 Most Powerful Women of the Past Century."
or support indie stores by buying on
(This book is on backorder)
Copyright © 2020 American Booksellers Association