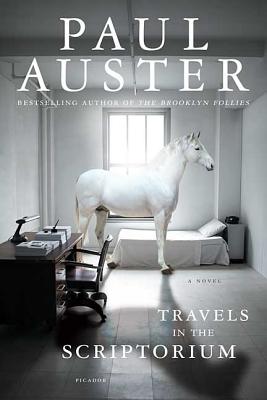 Travels in the Scriptorium

An old man awakens, disoriented, in an unfamiliar chamber. With no memory of who he is or how he has arrived there, he pores over the relics on the desk, examining the circumstances of his confinement and searching his own hazy mind for clues.

Determining that he is locked in, the man--identified only as Mr. Blank--begins reading a manuscript he finds on the desk, the story of another prisoner, set in an unfamiliar, alternate world. As the day passes, various characters call on Mr. Blank in his cell, and each brings frustrating hints of his forgotten identity and his past.

Both chilling and poignant, Travels in the Scriptorium is vintage Paul Auster: mysterious texts, fluid identities, a hidden past, and, somewhere, an obscure tormentor. And yet, as we discover during one day in the life of Mr. Blank, his world is not so different from our own.


Praise For Travels in the Scriptorium: A Novel…

“Archly playful and shrewdly philosophical . . . Celebrates the power of the imagination . . . The labyrinthine nature of the mind…[A] tribute to the transcendence of stories.” —Donna Seaman, Booklist

“This brief work radiates in so many directions . . . that there must be involved in it some sort of magic or wizardry.” —Rain Taxi

“Auster has an enormous talent for creating worlds that are both fantastic and believable. . . . His novels are uniformly difficult to put down, a testament to his storytelling gifts.” —Timothy Peters, San Francisco Chronicle

“One of America's greats . . . The writing is a tight as ever.” —Jonathan Messinger, Time Out Chicago