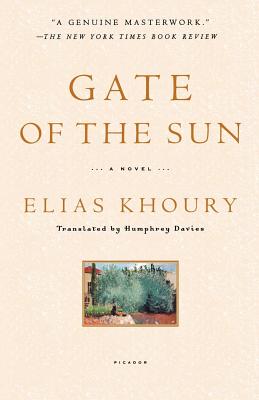 Gate of the Sun

A "Boldtype "Notable Book of the Year

A "Christian Science Monitor" Best Book of the Year

A "San Francisco Chronicle" Best Book of the Year

Drawing on the stories he gathered from refugee camps over the course of many years, Elias Khoury's epic novel "Gate of the Sun "has been called the first magnum opus of the Palestinian saga.

Yunes, an aging Palestinian freedom fighter, lies in a coma. Keeping vigil at the old man's bedside is his spiritual son, Khalil, who nurses Yunes, refusing to admit that his hero may never regain consciousness. Like a modern-day Scheherazade, Khalil relates the story of Palestinian exile while also recalling Yunes's own extraordinary life and his love for his wife, whom he meets secretly over the years at Bab al-Shams, the Gate of the Sun.


Praise For Gate of the Sun: Bab Al-Shams…

"Few have held to the light the myths, tales, and rumors of both Israel and the Arabs with such discerning compassion . . . Gate of the Sun is an imposingly rich and realistic novel, a genuine masterwork."--The New York Times Book Review

"Humanity and compassion are what give this rich and teeming narrative its shape, creating a work that in its essence is a heartfelt plea for sanity and peace."--The Christian Science Monitor "[A] stunning novel . . . A literary masterpiece on par with the work of Palestinian poet Mahmoud Darwish and Egyptian novelist Naguib Mahfouz."--Tikkun

"After Elias Khoury's Gate of the Sun, readers can no longer pretend that Palestine is merely a fugitive state of mind, a convenient Arab myth, a traumatic tribal memory, and somebody else's problem. This remarkable novel out of Lebanon, a skillful reshuffling of the 1001 Nights with a doctor in a refugee camp playing the part of Scheherazade, fills in the blank spaces on the Middle Eastern map in our Western heads."--John Leonard, Harper's

"The Stories are not propaganda--they are the all too real lives of people yearning for justice or escape; whose plight lies at the heart of so much conflict in the Middle East and beyond. Perhaps only a novelist could tell it this way."--The Times (London)

"In Gate of the Sun a character dreams of writing a 'book without a beginning or end . . . an epic of the Palestinian people,' based on the stories of every village, and starting from the 'great expulsion of 1948.' Elias Khoury's monumental novel is in a sense that groundbreaking book."--The Guardian (U.K.)

Elias Khoury is the author of eleven novels including The Journey of Little Gandhi, The Kingdom of Strangers, and Yalo. He is a professor of Middle Eastern and Islamic studies at New York University, and editor in chief of the literary supplement of Beirut's daily newspaper, An-Nahar.
Loading...
or
Not Currently Available for Direct Purchase