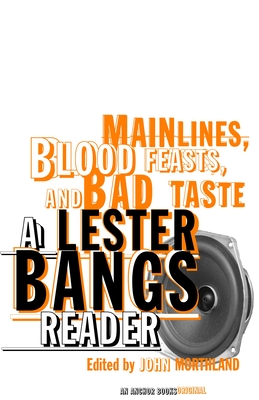 Before his untimely death in 1982, Lester Bangs was inarguably the most influential critic of rock and roll. Writing in hyper-intelligent Benzedrine prose that calls to mind Jack Kerouac and Hunter S. Thompson, he eschewed all conventional thinking as he discussed everything from Black Sabbath being the first truly Catholic band to Anne Murray’s smoldering sexuality. In Mainlines, Blood Feasts, Bad Taste fellow rock critic John Morthland has compiled a companion volume to Psychotic Reactions and Carburetor Dung, the first, now classic collection of Bangs’s work. Here are excerpts from an autobiographical piece Bangs wrote as a teenager, travel essays, and, of course, the music pieces, essays, and criticism covering everything from titans like Miles Davis, Lou Reed, and the Rolling Stones to esoteric musicians like Brian Eno and Captain Beefheart. Singularly entertaining, this book is an absolute must for anyone interested in the history of rock.

John Morthland, co-executor of the Bangs literary estate, was a colleague of Bangs from 1969 until the author's death. He was editor of Creem in 1974-75. He is a writer at large for Texas Monthly.
or support indie stores by buying on
Copyright © 2020 American Booksellers Association