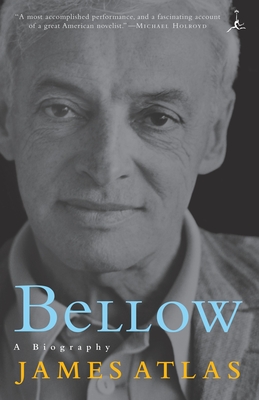 With this masterly and original work, Bellow: A Biography, National Book Award nominee James Atlas gives the first definitive account of the Nobel Prize–winning author’s turbulent personal and professional life, as it unfolded against the background of twentieth-century events—the Depression, World War II, the upheavals of the sixties—and amid all the complexities of the Jewish-immigrant experience in America, which generated a vibrant new literature.

Drawing upon a vast body of original research, including Bellow’s extensive correspondence with Ralph Ellison, Delmore Schwartz, John Berryman, Robert Penn Warren, John Cheever, and many other luminaries of the twentieth-century literary community, Atlas weaves a rich and revealing portrait of one of the most talented and enigmatic figures in American intellectual history.

Detailing Bellow’s volatile marriages and numerous tempestuous relation-ships with women, publishers, and friends, Bellow: A Biography is a magnificent chronicle of one of the premier writers in the English language, whose prize-winning works include Herzog, The Adventures of Augie March, and, most recently, Ravelstein.

Praise For Bellow: A Biography…

“A most accomplished performance, and a fascinating account of a great American novelist.” —Michael Holroyd

“James Atlas is a model biographer. He writes with the conversational ease of a born storyteller, giving us both a richly informed history of one of America’s most original and gifted writers and a mythos of the artist’s life in the twentieth century. . . . As fascinating a portrait as any of Bellow’s arresting fictional characters.” —Joyce Carol Oates

“Like a sparring partner, James Atlas enters the ring and weaves in and out of Bellow’s extravagant life and extraordinary novels with great dexterity.” —Michael Holroyd

James Atlas is the founding editor of the Lipper/Viking Penguin Lives Series. A longtime contributor to The New Yorker and Vanity Fair, he was an editor at The New York Times Magazine for many years. His work has appeared in The New York Times Book Review, The New York Review of Books, and many other journals. He is the author of Delmore Schwartz: The Life of an American Poet, which was nominated for the National Book Award, and of a novel, The Great Pretender.
Loading...
or support indie stores by buying on