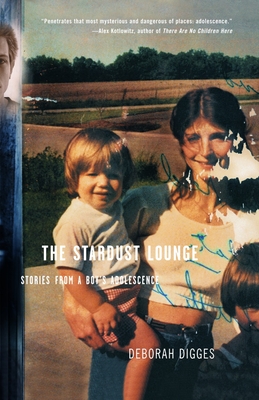 Stories from a Boy's Adolescence

Stephen Digges is the kind of angry adolescent a lot of parents would have given up on. He is out of control by the time he is 13 -- running with gangs, stealing cars, fooling around with drugs and guns, and in general making his family’s life hell. Confronted with his growing recklessness and defiance, his mother, the poet Deborah Digges, decides to try to accept Stephen on his own terms--a course that stuns her family and leads to the breakup of her second marriage. Digges “shadows” him on his late-night forays so that she can understand his world, welcomes his gang into their apartment, and tries to see life through his eyes. When she discovers that children who are devoted to animals have an easier time forming attachments to other people, she fills their home with a menagerie of ailing or abandoned pets. She also turns to an unconventional therapist who offers unusual — but helpful — treatment.

The Stardust Lounge isn’t your usual story of rebellious adolescence. The power of Digges’s memoir comes from her stubborn unwillingness to give up on Stephen. Even when things are roughest, Digges manages to see the intelligent, sensitive child behind the hostile behavior. However difficult the path she chooses, her story is ultimately a heartening one, and it’s impossible not to root for this family as it rebuilds itself.

Praise For The Stardust Lounge: Stories from a Boy's Adolescence…

“Penetrates that most mysterious and dangerous of places: adolescence. — Alex Kotlowitz, author of There Are No Children Here

“What makes this book so terribly fascinating is its honesty and Digges’s refusal to consider her son bad or worthless.” — USA Today

“Deborah Digges’s beautifully written, lucid memoir about raising a badass son on her own is impressively devoid of any poor-me sentiment” — Esquire

Deborah Digges lives in Massachusetts.
or
Not Currently Available for Direct Purchase