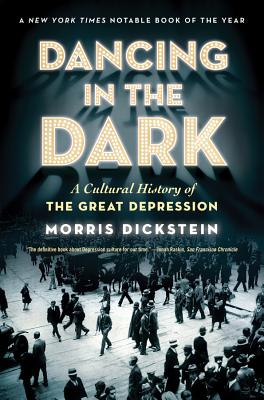 Dancing in the Dark

A Cultural History of the Great Depression

A Finalist for the National Book Critics Circle Award

"The definitive book about Depression culture for our time." —San Francisco Chronicle

Hailed as one of the best books of 2009 by the New York Times and the Los Angeles Times, this vibrant portrait of 1930s culture masterfully explores the anxiety and hope, the despair and surprising optimism of distressed Americans during the Great Depression. Morris Dickstein, whom Norman Mailer called "one of our best and most distinguished critics of American literature," has brought together a staggering range of material-from epic Dust Bowl migrations to zany screwball comedies, elegant dance musicals, wildly popular swing bands, and streamlined Deco designs. Exploding the myth that Depression culture was merely escapist, Dickstein concentrates on the dynamic energy of the arts, and the resulting lift they gave to the nation's morale. A fresh and exhilarating analysis of one of America's most remarkable artistic periods, with Dancing in the Dark Dickstein delivers a monumental critique.


Praise For Dancing in the Dark: A Cultural History of the Great Depression…

The equivalent of a Fred and Ginger dance number…a thrill to read.
— NPR

Morris Dickstein (1940—2021) was Distinguished Professor Emeritus of English and Theatre at the CUNY Graduate Center and the author of Gates of Eden, Dancing in the Dark, an award-winning cultural history of the Great Depression, and Why Not Say What Happened, a memoir.
Loading...
or support indie stores by buying on