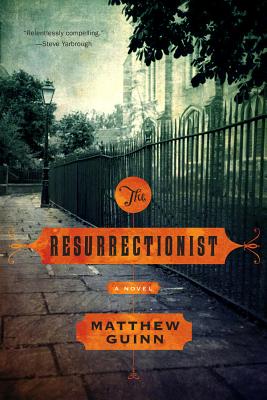 “Nemo Johnston is the head huntsman at the Windsor Plantation when he is sold to the fledging South Carolina Medical College and Physic where he will act as janitor, butler and grave-robbing body snatcher for many years. After all, medical students do need to work on human cadavers. A century and a half later, when construction workers unearth hundreds of bones of African American slaves in the cellar of one of its original buildings, the administration wants to avoid media coverage at all costs. Dr. Jacob Thacker is between a rock and a hard place: on two-year probation for Xanax abuse, he has been relegated to working public relations for the school and wants more than anything to return to medical practice. As he investigates the college's past and his own family history, Jacob is forced to decide between his own future and the future of the medical school. Well-written and suspenseful, The Resurrectionist is a bit of a medical history lesson wrapped up in a story of power, politics, secrecy and revenge. -Jennifer”
— Jennifer Gwydir, Blue Willow Bookshop, Houston, TX
View the List

At South Carolina Medical College, Dr. Jacob Thacker is on probation for Xanax abuse. His interim career—working university public relations—takes an unnerving detour into the past when the bones of African American slaves are unearthed on campus.

In a parallel narrative set in the nineteenth century, Nemo ("no man"), a university slave purchased for his unusual knife skills, becomes an unacknowledged member of the surgical faculty by day—and by night, a "resurrectionist," responsible for procuring bodies for medical study. An unforgettable character, by turns apparently insouciant, tormented, and brilliant, Nemo will seize his self-respect in ways no reader can anticipate.

With exceptional storytelling pacing and skill, Matthew Guinn weaves together past and present to relate a Southern Gothic tale of shocking crimes and exquisite revenge.

Matthew Guinn's first novel, The Resurrectionist, was a finalist for the Edgar Award. A native Atlantan, he now lives with his family in Jackson, Mississippi.

Praise For The Resurrectionist: A Novel…

Matthew Guinn has done something truly extraordinary here; he’s written a novel that is not only riveting and beautifully written, but one that dares to step into the long shadow of class and race in this country, a shadow into which Guinn shines a natural-born storyteller’s illuminating light. The Resurrectionist is a stunning debut.

— Andre Dubus III, author of Townie and House of Sand and Fog

Guinn’s fascinating, occasionally macabre, and engrossing novel offers a story of redemption and renewal while revealing the uncomfortable details about the historical practice of procuring human cadavers for doctors in training.

Strong pacing, interesting lead characters, well-framed moral questions, and clever resolutions to both prongs of the story are the hallmarks of this winning debut.
— Neil Hollands

The Resurrectionist is a spectacular novel that seamlessly connects fact and fiction, past and present. Matthew Guinn is a novelist who possesses that rarest and most underrated of literary gifts—how to tell a story in such a way that the reader surrenders completely to its power.