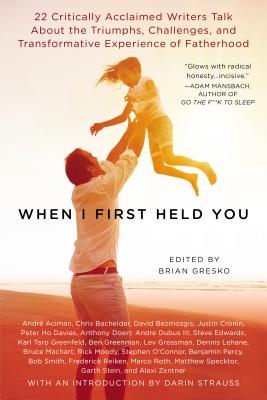 When I First Held You

From some of today’s most critically acclaimed writers—including Dennis Lehane, Justin Cronin, Andre Dubus III, and Benjamin Percy—comes a rich collection of essays on what it means to be a dad.

Becoming a father can be one of the most profoundly terrifying, exhilarating, life-changing occasions in a man’s life. Now 22 of today’s masterful writers get straight to the heart of modern fatherhood in this incomparable collection of thought-provoking essays. From making that ultimate decision to have a kid to making it through the birth to tangling with a toddler mid-tantrum, and eventually letting a teen loose in the world, these fathers explore every facet of fatherhood and show how being a father changed the way they saw the world—and themselves.

“One of the first things I learned about fatherhood was that my father was right: it was hard and it kicked the shit out of your life plan.”—Lev Grossman

“Bridges are engineered. Children are worked toward, clumsily, imperfectly, with a deep and almost religious faith in trial and error.”—Ben Greenman

“If you counted up the nights I’ve spent dancing to ‘Strangers in the Night,’ those hours would stretch three times around the equator.”—Garth Stein

“The most surprising aspect of parenting has been how much my pre-parenting life looks like a cloud in the rearview.”—Dennis Lehane


Praise For When I First Held You: 22 Critically Acclaimed Writers Talk About the Triumphs, Challenges, and Transfo rmative Experience of Fatherhood…

"[A] fabulous new anthology of fatherhood essays...A true must-read for pros and expectant parents alike. It's cutting and honest and hilarious and sad, with 22 essays from some of our best writers, such as Dennis Lehane, Justin Cronin, Lev Grossman, and many, many more...The essays are incredibly refreshing because they show fatherhood in such a vulnerable light—the good, the bad, the frustrating, and incredibly wonderful."—Parade magazine

"These gifted writers charge full-force into the heart of fatherhood…[An] impressive collection."—Publishers Weekly

"This collection could be subtitled 'Profiles in Perseverance.' These fathers have fought the battles, and we lucky readers receive this collection of wry, moving stories."—Library Journal

"A collection of luminous essays by men on parenthood that are easily read and terrifically illuminating...Full of remembrances and half-remembrances of parenting in all its glory: failure, triumph, joy, tribulation, humorous bits and tragedies big and small...Readers will laugh, or perhaps wipe a tear; parents will nod knowingly."—Shelf Awareness

Brian Gresko is a stay-at-home dad and writer based in Brooklyn. His essays and journalism have appeared on the Huffington Post, Salon, TheAtlantic.com, the Daily Beast, the Paris Review Daily, the Rumpus, and the Los Angeles Review of Books, among numerous other publications. He has also contributed to Glimmer Train and Slice magazine. He keeps a daily column about dads for Babble and is currently at work on a novel.
Loading...
or
Not Currently Available for Direct Purchase