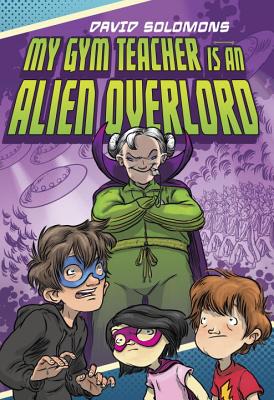 My Gym Teacher Is an Alien Overlord

When Luke's annoying older brother became a superhero instead of him, Luke thought he couldn't get any more disgruntled-- until his friend Lara became a superhero, too.  Now Luke's feeling totally left out; even his best friend gets mad at him when Luke's attempts at crime-solving without superpowers go terribly awry.  So when Luke discovers an alien plot to overthrow the world, he's got nobody to turn to who'll listen...nobody but his sworn enemy.  In this hilarious sequel to My Brother is a Superhero, Luke will have to put on his big-boy Daredevil underpants and find out what heroes and villains are truly made of.

Praise For My Gym Teacher Is an Alien Overlord…

PRAISE FOR MY BROTHER IS A SUPERHERO:

“A real treat…A hinted-at sequel will be eagerly anticipated by readers, who will want to return not only for the whizz-bang superhero stuff but also for the memorable and carefully developed sibling dynamic.”—BCCB

David Solomons is a screenwriter whose first feature film was an adaptation of Five Children and It (starring Kenneth Branagh and Eddie Izzard, with gala screenings at the Toronto and Tribeca Film Festivals). His latest film, Not Another Happy Ending, closed the Edinburgh International Film Festival. My Brother is a Superhero was his first novel for children. He was born in Glasgow and now lives in Dorset with his wife (and novelist) Natasha, and son, Luke. Follow him at @DavidSolomons2.
or
Not Currently Available for Direct Purchase