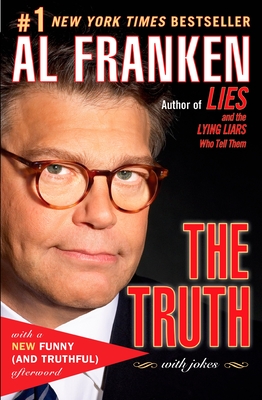 The Truth (with jokes)

Senator Al Franken’s landmark bestseller, Lies (And the Lying Liars Who Tell Them): A Fair and Balanced Look at the Right, was praised as a “bitterly funny assault” (The New York Times) that rang “with the moral clarity of an angel’s trumpet” (The Associated Press). Now, this master of political humor strikes again with a powerful and provocative message for all of us.

In these pages, Senator Franken reveals the alarming story of how:

• Bush (barely) beat Kerry with his campaign of “fear, smear, and queers,” and then claimed a nonexistent mandate.
• “Casino Jack” Abramoff, the Republicans’ nearest and dearest friend, made millions of dollars off of the unspeakable misery of the poor and the powerless. And, also, Native Americans.
• The administration successfully implemented its strategy to destroy America’s credibility and goodwill around the world.

Complete with new material for this paperback edition, The Truth (with jokes) is more than just entertaining, intelligent, and insightful. It is at once prescient in its analysis of right-wing mendacity and incompetence, and inspiring in its vision of a better tomorrow for all Americans (except Jack Abramoff).


Praise For The Truth (with jokes)…

Praise for Lies: And the Lying Liars Who Tell Them