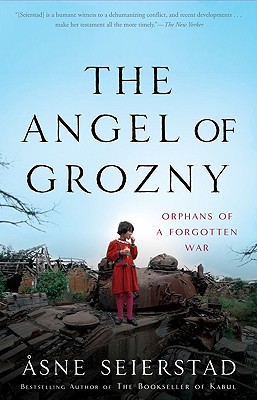 The Angel of Grozny

Orphans of a Forgotten War

In the early hours of New Year's 1994, Russian troops invaded the Republic of Chechnya, plunging the country into a prolonged and bloody conflict that continues to this day. A foreign correspondent in Moscow at the time, Ã?ne Seierstad traveled regularly to Chechnya to report on the war, describing its affects on those trying to live their daily lives amidst violence.

In the following decade, Seierstad became an internationally renowned reporter and author, traveling to the Balkans, Afghanistan, Iraq, and other war-torn regions. But she never lost sight of this conflict that had initially inspired her career. Over the course of a decade, she watched as Russia ruthlessly suppressed an Islamic rebellion in two bloody wars and as Chechnya evolved into one of the flashpoints in a world now focused on the threat of international terrorism.

In 2006, Seierstad finally returned to Chechnya, traveling in secret and under the constant threat of danger. In a broken and devastated society she lived with orphans, the wounded, the lost. And she lived with the children of Grozny, those who will shape the country's future. She asks the question: What happens to a child who grows up surrounded by war and accustomed to violence?

A compelling, intimate, and often heartbreaking portrait of Chechnya today, The Angel of Grozny is a vivid account of a land's violent history and its ongoing battle for freedom.

Åsne Seierstad is an award-winning journalist who has reported from such war-torn regions as Chechnya, China, Kosovo, Afghanistan, and Iraq. The author of A Hundred and One Days as well as The Bookseller of Kabul, she lives in Norway.
Loading...
or support indie stores by buying on