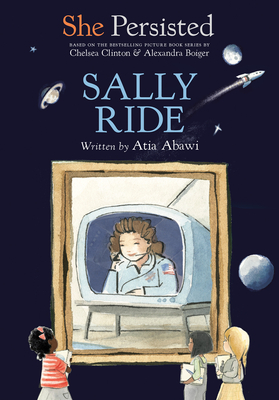 Inspired by the #1 New York Times bestseller She Persisted by Chelsea Clinton and Alexandra Boiger, a chapter book series about women who stood up, spoke up and rose up against the odds!

Complete with an introduction from Chelsea Clinton, black-and-white illustrations throughout, and a list of ways that readers can follow in Sally Ride's footsteps and make a difference! A perfect choice for kids who love learning and teachers who want to bring inspiring women into their curriculum.

And don’t miss out on the rest of the books in the She Persisted series, featuring so many more women who persisted, including Temple Grandin, Virginia Apgar, and more!

Praise For She Persisted: Sally Ride…

Praise for She Persisted: Sally Ride:

"A well-rounded portrait not only of its subject but also of the obstacles faced by women in science and in astronautics." --The Horn Book

Alexandra Boiger (alexandraboiger.com) has illustrated nearly twenty picture books, including the She Persisted series by by Chelsea Clinton; the popular Tallulah series by Marilyn Singer; and the Max and Marla books, which she also wrote. Originally from Munich, Germany, she now lives outside of San Francisco, California, with her husband, Andrea; daughter, Vanessa; and two cats, Luiso and Winter. You can follow Alexandra on Instagram @alexandra_boiger.
Loading...
or
Not Currently Available for Direct Purchase