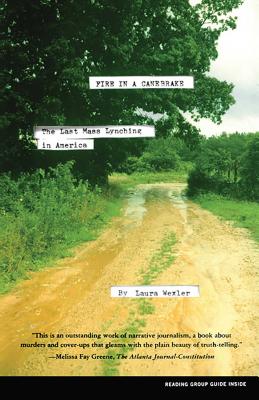 Fire in a Canebrake

The Last Mass Lynching in America

July 25, 1946. In Walton County, Georgia, a mob of white men commit one of the most heinous racial crimes in America's history: the shotgun murder of four black sharecroppers -- two men and two women -- at Moore's Ford Bridge. Fire in a Canebrake, the term locals used to describe the sound of the fatal gunshots, is the story of our nation's last mass lynching on record. More than a half century later, the lynchers' identities still remain unknown.
Drawing from interviews, archival sources, and uncensored FBI reports, acclaimed journalist and author Laura Wexler takes readers deep into the heart of Walton County, bringing to life the characters who inhabited that infamous landscape -- from sheriffs to white supremacists to the victims themselves -- including a white man who claims to have been a secret witness to the crime. By turns a powerful historical document, a murder mystery, and a cautionary tale, Fire in a Canebrake ignites a powerful contemplation on race, humanity, history, and the epic struggle for truth.

Praise For Fire in a Canebrake: The Last Mass Lynching in America…

Melissa Fay Greene The Atlanta Journal-Constitution This is an outstanding work of narrative journalism, a book about murders and cover-ups that gleams with the plain beauty of truth-telling.

Salon.com Wexler's telling has all the elements of a horrific Southern mystery...an admirable accomplishment.

Juan Williams author of Eyes on the Prize: America's Civil Rights Years, 1954-1965 This is Truman Capote's In Cold Blood with the added fuel of race, sex, and the quirks of Southern culture.

Laura Wexler's work has appeared in The Oxford American, DoubleTake, and Utne Reader, among other publications. She has taught writing at the University of Georgia and Johns Hopkins University. She lives in Baltimore. Visit the author's website at www.fireinacanebrake.com.
Loading...
or support indie stores by buying on