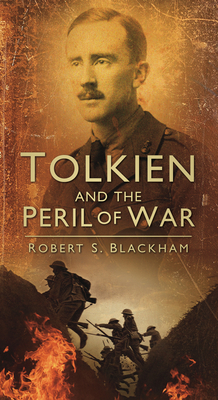 Tolkien and the Peril of War

How the Great War impacted Tolkien's life and work  J.R.R. Tolkien’s experiences of the Battle of the Somme forever imprinted on his mind, and became a dramatic source of inspiration for The Lord of the Rings. This absorbing book charts Tolkien's life from 1914 to 1918, using old postcards, maps, and photographs to paint a picture of the places and times that relate to one of the leading authors of the 20th century. Tolkien joined the army in 1915 and trained in Bedford and Brocton Camp on Cannock Chase while his wife lived in the village of Great Haywood, close to the camp. A number of the places in and around Great Haywood were destined to appear in his later works. In 1916 Tolkien learned of the death of two of his school friends in the bloody Battle of the Somme. He contracted Trench Fever in late October 1916 and returned to Birmingham, his hometown, by hospital ship and train. The final part of the book covers his time in England, an era in which he was blighted by illness. Richly illustrated, this fascinating volume is an essential purchase for Tolkien-lovers everywhere.

Praise For Tolkien and the Peril of War…

"...will prove an interesting read for both Tolkien fans and anyone interested in solidering." —The NYMAS Review

Robert S. Blackham is a member of the Birmingham Tolkien Strategy Group and the vice chair of The Shire Country Park Friends, a park named to commemorate J.R.R. Tolkien's childhood connections with the area in Birmingham. He is the author of The Roots of Tolkien's Middle-Earth, The Pitkin Guide to Tolkien, Tolkien's Birmingham, and Tolkien's Oxford.
Loading...
or
Not Currently Available for Direct Purchase