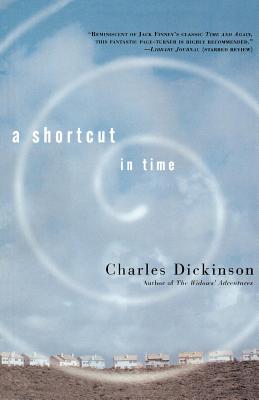 A Shortcut in Time

Charles Dickinson's novels and short stories have won widespread acclaim for their deft characterization, humanity, and humor. Newsday described him as "a writer thoroughly in command of his art," while the Chicago Tribune wrote "he can surprise us at almost every turn."

Now Dickinson slips beyond the bounds of mundane realism to create a poignant fantasy that bears comparison to the work of Jack Finney and Jonathan Carroll.

Euclid, Illinois, is a town of many shortcuts, between houses, through orchards, and across fields. Josh Winkler, a local artist and longtime resident, knows these irregular pathways well, but is thoroughly taken aback when a hasty dash down a familiar walk deposits him fifteen minutes in the past--literally. At first, Josh is more intrigued than alarmed by this accidental time travel. Then a lost young woman appears, claiming to be from 1908 . . . .

As his life, his family, his town, and even history itself begin to unravel, Josh gradually realizes that his only salvation may lie in A Shortcut Time.

Charles Dickinson has written a moving and unforgettable book about the way the past can affect the present as well as, sometimes, the other way around.


Praise For A Shortcut in Time…

“How Charles Dickinson manages to mix his particular blend of wackiness, elegant humor, and rich realism may forever remain his secret.” —The New York Times

Charles Dickinson is a journalist and novelist. He won the O. Henry award in 1980 and went on to publish such novels as Waltz in Marathon, Crows, The Widows' Adventures, and Rumor Has It, as well as the short story collection With or Without.
Loading...
or support indie stores by buying on