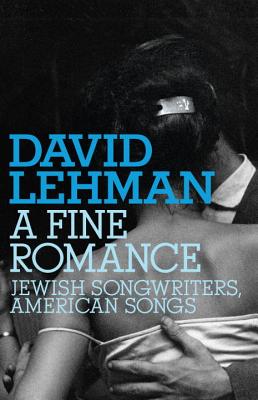 In A Fine Romance, David Lehman looks at the formation of the American songbook--the timeless numbers that became jazz standards, iconic love songs, and sound tracks to famous movies--and explores the extraordinary fact that this songbook was written almost exclusively by Jews. An acclaimed poet, editor, and cultural critic, David Lehman hears America singing--with a Yiddish accent. He guides us through America in the golden age of song, when "Embraceable You," "White Christmas," "Easter Parade," "Bewitched, Bothered and Bewildered," "Can't Help Lovin' Dat Man," "My Romance," "Cheek to Cheek," "Stormy Weather," and countless others became nothing less than the American sound track. The stories behind these songs, the shows from which many of them came, and the shows from which many of them came, and the composers and lyricists who wrote them give voice to a specifically American saga of love, longing, assimilation, and transformation. Lehman's analytical skills, wit, and exuberance infuse this book with an energy and a tone like no other: at once sharply observant, personally searching, and attuned to the songs that all of us love. He helps us understand how natural it should be that Wizard of Oz composer Harold Arlen was the son of a cantor who incorporated "Over the Rainbow" into his Sabbath liturgy, and why Cole Porter--the rare non-Jew in this pantheon of musicians who wrote these classic songs shaped America even as America was shaping them. (Part of the Jewish Encounter series)

"David Lehman's A Fine Romance wittily explores the enormous contribution of Jewish writers and composers to the American musical scene. Lehman finds Jewish influence, or what he calls 'a plaintive undertow,' even in such unlikely upbeat anthems as Gershwin's 'Love Walked In.' His love-struck history is itself a major entertainment."
-- John Ashbery, author of Three Poems

"David Lehman's A Fine Romance is a spirited account and reminiscence of a time when Jewish plaintiveness and wit combined with Negro blues to give our American culture its way of singing. Everyone who hums the great old tunes will delight in this book and its wondrous lore."
--Richard Wilbur, author of Things of This World

"With brio and encyclopedic knowledge, David Lehman has penned a lovely valentine to the American songbook. Along the way, hard questions are asked, contradictions confronted and shrewd insights offered. The result is pure delight."
--Phillip Lopate, author of Two Marriages

“What a lovely book this is…Lehman is a fine writer, in full command of his subject.” –writerscast.com

“A Fine Romance is thoroughly enjoyable, right down to the short, witty, and informative chronology at the end of the book. Whether one is familiar with this music and wants to rekindle its romance, or unfamiliar and wants to ignite such a passion, this book is just the ticket.” –Rain Taxi Review of Books

“Though there’s lots of learning here, there’s no heavy-handedness: this is a chrestomathy of loved tunes and musical moments, evoked casually, but with wide authority and tact…song is for pleasure after all, if I can quote some non-Jewish jazz royalty in Duke Ellington, ‘it don’t mean a thing if it ain’t got that swing.’ Lehman has that swing.” –Tikkun