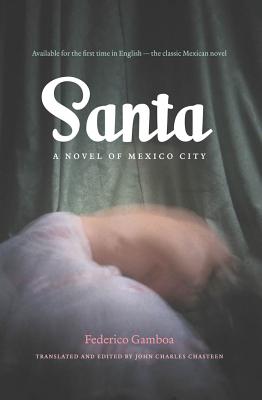 A Novel of Mexico City

This enduring classic of Mexican literature traces the path to ruination of a country girl, Santa, who moves to Mexico City after she is impregnated and abandoned by her lover and subsequently shunned by her family. Once in the city, Santa turns to prostitution and soon gains prominence as Mexico City's most sought-after courtesan. Despite the opportunities afforded by her success, including the chance to quit prostitution, Santa is propelled by her personal demons toward her ultimate downfall. This evocative novel--justly famous for its vividly detailed depiction of the cityscape and the city's customs, social interactions, and political activities--assumed singular importance in Mexican popular culture after its original publication in 1903. The book inspired Mexico's first talkie and several other film adaptations, a music score, a radio series, a television soap opera, and a pornographic comic book.

Naturalist writer Federico Gamboa, who was also a lawyer and politician, reveals much about Mexican mores and culture at the start of the twentieth century and beyond, from expectations regarding gender roles to the myth of the corrupting and decadent city. In describing how Santa is at the mercy of social problems beyond her control, Gamboa provides a rich historical portrayal of widespread conditions in the years leading to the Mexican Revolution.