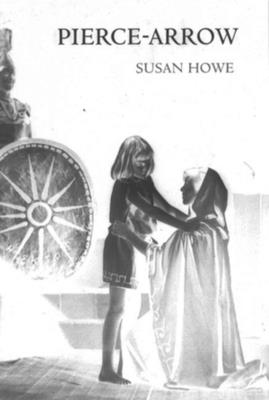 Pierce-Arrow takes as its shooting off point the figure of Charles S. Peirce, the allusive late nineteenth-century philosopher-scientist and founder of pragmatism, a man always on the periphery of the academic and social establishments yet intimately conjoined with them by birth and upbringing.

Pierce-Arrow, Susan Howe’s newest book of poems, takes as its point of departure the figure of Charles S. Peirce, the allusive nineteenth-century philosopher-scientist and founder of pragmatism, a man always on the periphery of the academic and social establishment yet intimately conjoined with them by birth and upbringing. Through Peirce and his wife Juliette, a lady of shadowy antecedents, Howe creates an intriguing nexus that explores the darker, melancholy sides of the fin-de-siecle Anglo-American intelligentsia. George Meredith and his wife Mary Ellen, Swinburne and his companion Theodore Watts-Dunton, are among those who also find a place in the three long poem-sequences that comprise the book. Howe’s historical linkings, resonant with the sorrows of love and loss and the tragedies of war, create a compelling canvas of associations. “It’s the blanks and gaps,” she says, “that to me actually represent what poetry is—the connections between seemingly unconnected things—as if there is a place and might be a map to thought, when we know there is not.”

Susan Howe’s imaginative and irresistible re-creation of’ the hidden life of the philosopher Charles Sanders Peirce, his relationship with the mysterious ‘gypsy’ wife Juliette, his worldly failures and spiritual triumphs, has the intensity of a Jamesian novel in which the figure in the carpet—in this case a figure comprised of Peirce’s astonishing visual texts, scenes from the Iliad, from the poems of Swinburne and Meredith, and finally the Tristan and Iseult legend—crystallize in an overarching vision of the poet’s own desire—and failure—to achieve oneness,  union with another self. Part narrative, part lyric, this profound memory poem conveys, as do few poems of our time, what Howe refers to as ‘Mind's trajected light.’

In Pierce-Arrow Susan Howe breaches the distance between symbol and history. She does this by means of the recursive motion of lyric time. It has been her continuing vocation in much of her poetry to inscribe the tragic coincidence of coincidence and loss. Yet this book, her masterpiece, is as beautiful as a myth made visible in the ever-receding intervals between what is gone and what arrives.

Susan Howe's Pierce-Arrow is a true and living poem—more philosophical then history, without ceasing to be history—and more lyric than philosophical in its visiting of the buried life of the most passionate American philosopher. Howe's Peirce is a successor to her Emily Dickinson and, as such, a further chapter in her own right, and her book—Pierce-Arrow—is also a fast car with a fantasmatic shift—the mind as it desires to know—the body which by its nature holds the road—and carries the heart elsewhere—beyond destination. Peace thereafter/Rest fathom over.