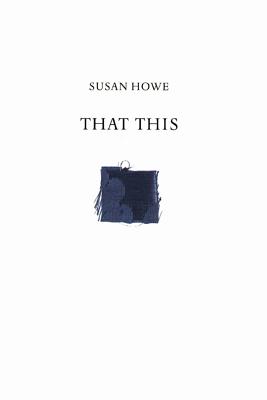 Susan Howe’s newest book of poetry is a revelation as well as a mystery.

"What treasures of knowledge we cluster around." That This is a collection in three pieces. "Disappearance Approach," an essay about Howe's husband's sudden death—"land of darkness or darkness itself you shadow mouth"—begins the book with paintings by Poussin, an autopsy, Sarah Edwards and her sister-in-law Hannah, phantoms, and elusive remnants. "Frolic Architecture," the second section—inspired by visits to the vast 18th-century Jonathan Edwards archives at the Beinecke and accompanied by six photograms by James Welling—presents hauntingly lovely, oblique type-collages of Hannah Edwards Wetmore's diary entries that Howe (with scissors, "invisible" Scotch Tape, and a Canon copier) has twisted, flattened, and snipped into inscapes of force. The final section, "That This," delivers beautiful short squares of verse that might look at home in a hymnal, with their orderly appearance packing startling power:

That this book is a history of

a shadow that is a shadow of

Me mystically one in another

another another to subserve.


Praise For That This…

For nearly thirty years, Howe has occupied a particular and invaluable place in American poetry. She's a rigorously skeptical and a profoundly visionary poet, a writer whose demystifying intelligence is matched by a passionate embrace of poetry's rejuvenating power.
— John Palattella - The Boston Review

An important voice in contemporary literature, a signal inheritor of an American poetic tradition. Like Dickinson, her Massachusetts muse, Howe turns the English of a self steeped in books such that every word, as in Scripture, glows with an almost moral quality.
— Artforum

Monomania has its rewards—an incantatory power that shines through. Howe's images, being historical as well as biographical, have the eerie sharing of ghosts half-believed in, giving a surreal, dreamlike atmosphere reminiscent of Borges at his sharpest.
— Kirkus Reviews

James Welling, b. 1951, is an acclaimed experimental artist who employs a wide variety of photographic tools and media.
Loading...
or
Not Currently Available for Direct Purchase