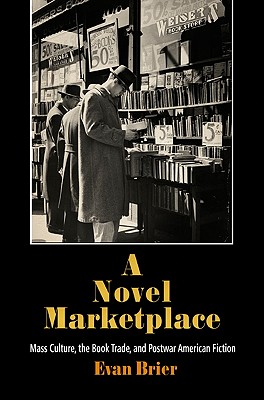 As television transformed American culture in the 1950s, critics feared the influence of this newly pervasive mass medium on the nation's literature. While many studies have addressed the rhetorical response of artists and intellectuals to mid-twentieth-century mass culture, the relationship between the emergence of this culture and the production of novels has gone largely unexamined.

In A Novel Marketplace, Evan Brier illuminates the complex ties between postwar mass culture and the making, marketing, and reception of American fiction. Between 1948, when television began its ascendancy, and 1959, when Random House became a publicly owned corporation, the way American novels were produced and distributed changed considerably. Analyzing a range of mid-century novels--including Paul Bowles's The Sheltering Sky, Ray Bradbury's Fahrenheit 451, Sloan Wilson's The Man in the Gray Flannel Suit, and Grace Metalious's Peyton Place--Brier reveals the specific strategies used to carve out cultural and economic space for the American novel just as it seemed most under threat. During this anxious historical moment, the book business underwent an improbable expansion, by capitalizing on an economic boom and a rising population of educated consumers and by forming institutional alliances with educators and cold warriors to promote reading as both a cultural and political good. A Novel Marketplace tells how the book trade and the novelists themselves successfully positioned their works as embattled holdouts against an oppressive mass culture, even as publishers formed partnerships with mass-culture institutions that foreshadowed the multimedia mergers to come in the 1960s. As a foil for and a partner to literary institutions, mass media corporations assisted in fostering the novel's development as both culture and commodity.

Evan Brier teaches English at the University of Minnesota, Duluth.
Loading...
or support indie stores by buying on