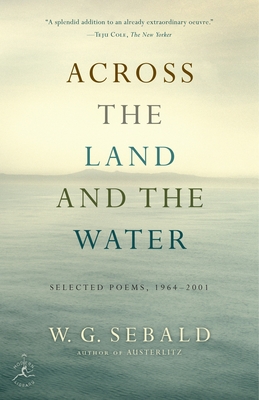 Across the Land and the Water

“A splendid addition to an already extraordinary oeuvre.”—Teju Cole, The New Yorker

German-born W. G. Sebald is best known as the innovative author of Austerlitz, the prose classic of World War II culpability and conscience that put its author in the company of Nabokov, Calvino, and Borges. Now comes the first major collection of this literary master’s poems. Skillfully translated by Iain Galbraith, they range from pieces Sebald wrote as a student in the sixties to those completed right before his untimely death in 2001. In nearly one hundred poems—the majority published in English for the first time—Sebald explores his trademark themes, from nature and history, to wandering and wondering, to oblivion and memory. Soaring and searing, the poetry of W. G. Sebald is an indelible addition to his superb body of work, and this collection is bound to become a classic in its own right.

“How fortunate we are to have this writer’s startling imagination freshly on display once again, expressed in language honed to a perfect simplicity.”—Billy Collins

“A watershed volume . . . nothing less than transcendent.”—BookPage

“[Sebald was] a defining writer of his era.”—The New Republic

“How fortunate we are to have this writer’s startling imagination freshly on display once again, and now in poetry.  ACROSS THE LAND AND THE WATER is a rich collection full of little mysteries, unnerving insights, and odd reflections, all expressed in language honed to a perfect simplicity.  ‘The Three Wise Men/Are walking the earth,’ his lines go, and at least one of them is W.G. Sebald.” -- Billy Collins, former United States Poet Laureate

"A significant addition to Sebald's main achievement – full of things that are beautiful and fascinating in themselves, and which cast a revealing light on the evolution and content of his prose . . . . an important book." -- The Guardian UK

"Now with the publication of Across the Land and the Water: Selected Poems 1962-2001 , thanks to the translation and scholarship of Iain Galbraith, Sebald readers can hear the master’s voice again and see in distilled form the Sebald landscape, as if for the first time...Sebald reminds me of the humanist tradition of Günter Grass or Heinrich Böll, company he unquestionably belongs to as poet, essayist and prose writer, one of the great artists of our time." -- The Irish Times

"This selection of W G (Max) Sebald’s poems will be treasure trove to his admirers. Brilliantly translated by Iain Galbraith . . . it includes works from the whole length of his creative life, cut short far too early in December 2001... In fact, read them all, and more than once. I would suggest reading the poems straight through first, then again side by side with Galbraith’s notes – seldom is a set of notes to a text so entertaining in itself – and then for a third time. Three readings, I can assure anyone, will be no hardship." -- Literary Review UK

"As in his prose, the poems invest every landscape with an archaeologist's sense of the pain, toil and loss secreted in each layer of soil. Always an inveterate 'Border Crosser' – between lands, ages, moods, poetry and prose, history and fiction – he seeks 'to register/ what we have forgotten' . . . the wonderful alchemy via which Sebald transmuted the found material of actual biography and history into fiction that kept faith with truth explains much of his appeal." -- The Independent UK

"Preoccupied with memory, desire and the ghostliness of objects, Sebald can evoke in one poem the faded glamour of 'a forgotten era/of fountains and chandeliers' or a 'turn-of-the-century/frock-coat and taffeta bow' while in another he will speak of an 'ugly/tower block' or 'moribund supermarkets'. This shift between differing eras could seem forced or artificial. And yet Sebald manages such movement with a lightness of touch...Even in a seemingly simple six-line poem, the sudden weight of historical events can be felt." -- The Economist UK

“Is literary greatness still possible? What would a noble literary enterprise look like? One of the few answers available to English-speaking readers is the work of W. G. Sebald.”—Susan Sontag

“Sebald stands with Primo Levi as the prime speaker of the Holocaust and, with him, the prime contradiction of Adorno’s dictum that after it, there can be no art.”—Richard Eder, The New York Times Book Review

“Sebald is a rare and elusive species . . . but still, he is an easy read, just as Kafka is. . . . He is an addiction, and once buttonholed by his books, you have neither the wish nor the will to tear yourself away.”—Anthony Lane, The New Yorker

“The secret of Sebald’s appeal is that he saw himself in what now seems almost an old-fashioned way as a voice of conscience, someone who remembers injustice, who speaks for those who can no longer speak.”—Charles Simic, The New York Review of Books

W. G. Sebald was born in Wertach im Allgäu, Germany, in 1944. He studied German language and literature in Freiburg, Switzerland, and Manchester. He taught at the University of East Anglia in Norwich, England, for thirty years, becoming professor of European literature in 1987, and from 1989 to 1994 was the first director of the British Centre for Literary Translation. His previously translated books—The Rings of Saturn, The Emigrants, Vertigo, and Austerlitz—have won a number of international awards, including the National Book Critics Circle Award, the Los Angeles Times Book Award, the Berlin Literature Prize, and the LiteraTour Nord Prize. He died in December 2001.

Iain Galbraith was born in Glasgow in 1956 and studied modern languages and comparative literature at the universities of Cambridge, Freiburg, and Mainz, where he taught for several years. He has edited works by Stevenson, Hogg, Scott, Boswell, and Conrad, and contributed essays to many books and journals in the U.K., France, and Germany. He is a widely published translator of German-language writing, especially poetry, into English, winning the John Dryden Prize for Literary Translation in 2004.
Loading...
or support indie stores by buying on