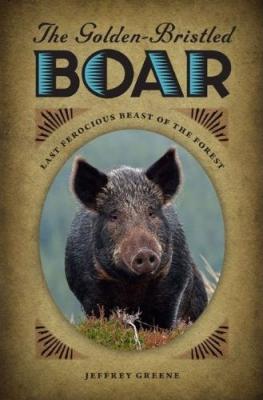 Last Ferocious Beast of the Forest

The wild boar appears to us as something straight out of a myth. But as Jeffrey Greene learned, these creatures are very real, living by night and, despite shrinking habitats and hordes of hunters, thriving on six continents.

Greene purchased an eighteenth-century presbytery in a region of ponds and forests in northern Burgundy between the Loire and Seine Rivers of France. He soon discovered he'd moved to one of the most densely populated boar areas in Europe. Following the gift of a side of boar from a neighbor, and a dramatic early-morning encounter with a boar-hunting party and its prey, Greene became fascinated with the animal and immersed himself in the legend and the reality of the wild boar.

Although it has no natural enemies, the boar is in constant conflict with humans. Most societies consider it a pest, not only wreaking havoc on crops and livestock, but destroying golf-course greens in search of worms, even creating a hazard for drivers (hogs on the roads cause over 14,000 car accidents a year in France). It has also been the object of highly ritualized hunts, dating back to classical times.

The animal's remarkable appearance--it can grow larger than a person, and the males sport prominent tusks, called "whetters" and "cutters"--has inspired artists for centuries; its depictions range from primitive masks to works of high art such as Pietro Tacca's Porcellino and paintings by Vel?zquez and Frans Snyders. The boar also plays a unique role in myth, appearing in the stories of Hercules and Adonis as well as in the folktale Beauty and the Beast.

The author's search for the elusive animal takes him to Sardinia, Corsica, and Tuscany; he even casts an eye to the American South, where he explores the boar's feral-pig counterparts and descendents. He introduces us to a fascinating cast of experts, from museum curators and scientists to hunters and chefs (who share their recipes) to the inhabitants of chateaux who have lived in the same ancient countryside with generations of boars. They are all part of a journey filled with wonders and discoveries about these majestic animals the poet Robinson Jeffers called "beautiful monsters."

Jeffrey Greene is the author of French Spirits: A House, a Village, and a Love Affair with Burgundy and Water from Stone: The Story of Selah, Bamberger Ranch Preserve. A widely published poet, he is the recipient of the Samuel French Morse Poetry Prize and the Randall Jarrell Award in Poetry. He teaches at the American University of Paris.
Loading...
or support indie stores by buying on