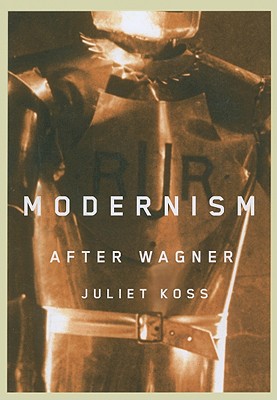 References to the Gesamtkunstwerk, a "total work of art," abound in discussions of modern art and culture, often describing a seamless melding of a variety of art forms that overwhelm the emotions, impede critical thought, and mold a group of individuals into a powerless mass. Famously set forth by the composer Richard Wagner in 1849, the term has been applied to such disparate settings as the cinema palaces of Berlin in the 1920s and Andy Warhol's Factory scene in New York in the 1960s.

In Modernism after Wagner, Juliet Koss explores the history and legacy of Wagner's concept, laying out its genealogy and the political, aesthetic, and cultural context from which it emerged, and tracing its development and reception through the 1930s. Beginning with Wagner's initial articulation of the Gesamtkunstwerk in the wake of the 1848-49 revolution, Koss addresses a series of linked episodes in German aesthetic theory and artistic practice that include the composer's efforts to build a theater to house his music dramas, culminating in the construction of the festival theater at Bayreuth in 1876; German aesthetic theory and criticism in the visual arts, theater, film, and radio from the 1870s to the 1920s; the founding of the Darmstadt Artists' Colony in 1901 and that of the Munich Artists' Theater in 1908; performances and parties at the Bauhaus in the 1920s and 1930s; and the legacy of the Gesamtkunstwerk under National Socialism. Attending to Wagner's absorption into Fascist aesthetics, Koss foregrounds the revolutionary origins of the Gesamtkunstwerk and its emancipatory potential.

Rigorously researched and highly accessible, Modernism after Wagner places the Gesamtkunstwerk at the heart of modern art and culture.


Praise For Modernism after Wagner…

“This is an extraordinary book: thoughtful, deft, and learned, it offers a compelling revisionist account of the history and destiny of the Gesamtkunstwerk. The implications for our understanding of the Gesamtkunstwerk are transformative: this book challenges us to rethink not only a conventional history, but our propensity to parrot a conventional party line of that history.” —David J. Levin, University of Chicago; Executive Editor, The Opera Quarterly

“A radically revisionist, and convincing, case that the nineteenth-century ideal of the total work of art (Gesamtkunstwerk) and the modernist concept of estrangement are locked in dialogue rather than opposition, Juliet Koss’s book is necessary reading for historians of modern spectatorship across the spectrum of art and architectural history, media and cultural studies, politics, and critical theory.” —Barry Bergdoll, The Philip Johnson Chief Curator of Architecture and Design, The Museum of Modern Art

“This book constitutes a major intervention in the study of modernism both within, and well beyond, the fields of architecture and art history. Modernism after Wagner traverses astonishingly diverse terrain. Avoiding the elegiac register of recent studies, Juliet Koss brings to an impossibly expansive subject a welcome historical precision, laced with mordant wit.” —Tim Barringer, Yale University

Juliet Koss is associate professor and chair of art history at Scripps College and coordinator of the Joint Art History Program of the Claremont Colleges.
Loading...
or
Not Currently Available for Direct Purchase