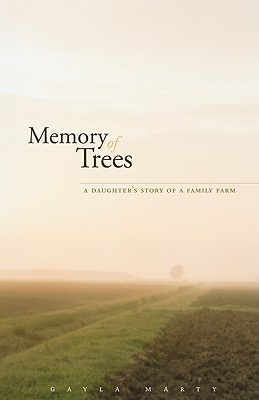 A Daughter’s Story of a Family Farm

Memory of Trees is a multigenerational story of Gayla Marty’s family farm near Rush City, Minnesota. Cleared from woodlands by her great-grandfather Jacob in the 1880s, the farm passed to her father, Gordon, and his brother, Gaylon. Hewing to a conservative Swedish Baptist faith, the two brothers worked the farm, raising their families in side-by-side houses.

As the years go by, the families grow—and slowly grow apart. Uncle Gaylon, more doctrinaire in his faith, rails against the permissiveness of Gayla’s parents. Financial tensions arise as well when the farm economy weakens and none of the children is willing or able to take over. Gayla is encouraged to leave for college, international travel, and city life, but the farm remains essential to her sense of self, even after the family decides to sell the land.

When Gaylon has an accident on a tractor, Gayla becomes driven to reconnect with him and to find out why she and her uncle—once so close but now estranged—were the only two members of the family who had resisted selling the land. Guided by vivid images of the farm’s many beautiful trees, she pores over sacred and classical works as well as layers of her own memory to understand the forces that have transformed the American landscape and culture in the last half of the twentieth century. Beneath the belief in land as a giver of life and blessing, she discovers a powerful anxiety born of human uprootedness and loss. Movingly written, Memory of Trees will resonate for many with attachments to small towns or farms, whether they continue to work the land or, like so many, have left for a different life.

Gayla Marty is a writer and editor in Minneapolis, Minnesota.