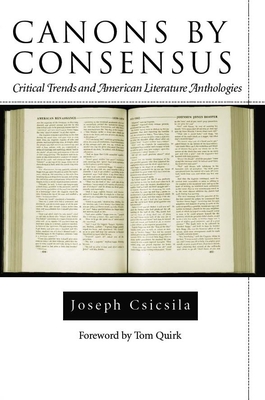 Scholars have long noted the role that college literary anthologies play in the rising and falling reputations of American authors. Canons by Consensus examines this classroom fixture in detail to challenge and correct a number of assumptions about the development of the literary canon throughout the 20th century.

Joseph Csicsila analyzes more than 80 anthologies published since 1919 and traces not only the critical fortunes of individual authors, but also the treatment of entire genres and groupings of authors by race, region, gender, and formal approach. In doing so, he calls into question accusations of deliberate or inadvertent sexism and racism. Selections by anthology editors, Csicsila demonstrates, have always been governed far more by prevailing trends in academic criticism than by personal bias.

Academic anthologies are found to constitute a rich and often overlooked resource for studying American literature, as well as an irrefutable record of the academy’s changing literary tastes throughout the last century.

"This is a landmark resource. . . . Professor Csicsila's most important achievement is to clarify the ways in which the canon of the first part of the 20th century has remained largely intact, still central to the visions of Americanists as a new century begins."
—George Perkins, editor of The American Tradition in Literature

"Csicsila's excellent study astutely discerns the shifting paradigms in nearly a century of college classroom texts, in the process overturning many notions about the supposed biases of literary anthology editors. Canons by Consensus reveals how a teaching tool long taken for granted can serve as an invaluable index to academic movements and fads."
—Alan Gribben, author of Mark Twain's Library: A Reconstruction

Joseph Csicsila is Assistant Professor of English at Eastern Michigan University where he was recognized with the 2002 Ronald W. Collins Distinguished Faculty Award for Teaching.
Tom Quirk is Professor of English at the University of Missouri-Columbia and the author of Nothing Abstract: Investigations in the American Literary Imagination.
Loading...
or
Not Currently Available for Direct Purchase