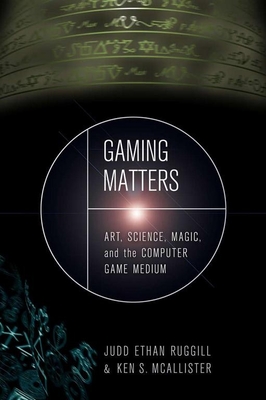 Normal0falsefalsefalseMicrosoftInternetExplorer4
In his 2004 book Game Work, Ken S. McAllister proposed a rigorous critical methodology for the discussion of the “video game complex”—the games themselves, their players, the industry that produces them, and those who review and market them. Games, McAllister demonstrated, are viewed and discussed very differently by different factions: as an economic force, as narrative texts, as a facet of popular culture, as a psychological playground, as an ethical and moral force, even as a tool for military training.
In Gaming Matters, McAllister and coauthor Judd Ruggill turn from the broader discussion of video game rhetoric to study the video game itself as a medium and the specific features that give rise to games as similar and yet diverse as Pong, Tomb Raider, and Halo. In short, what defines the computer game itself as a medium distinct from all others? Each chapter takes up a different fundamental characteristic of the medium. Games are:
• Idiosyncratic, and thus difficult to apprehend using the traditional tools of media study
• Irreconcilable, or complex to such a degree that developers, players, and scholars have contradictory ways of describing them
• Boring, and therefore obligated to constantly make demands
on players’ attention
• Anachronistic, or built on age-old tropes and forms of play
while ironically bound to the most advanced technologies
• Duplicitous, or dependent on truth-telling rhetoric even when they are about fictions, fantasies, or lies
• Work, or are often better understood as labor rather than play
• Alchemical, despite seeming all-too mechanical or predictable
Video games are now inarguably a major site of worldwide cultural production.
Gaming Matters will neither flatter game enthusiasts nor embolden game detractors in their assessments. But it will provide a vocabulary through which games can be discussed in academic settings and will create an important foundation for future academic discourse.

Normal0falsefalsefalseMicrosoftInternetExplorer4
“A stimulating, provocative, and informative discussion of games that both contributes to some ongoing discussions and debates, and moves beyond others that have stalled. . . . With each chapter structured as something of a provocation, the book strikes me as ideal for undergraduates new to the study of games, while also being excellent for grizzled veterans of game studies who’d like a fresh approach to old issues.”—Jonathan Gray, author of Television Entertainment

“This small volume is big on ideas. Ruggill and McAllister move beyond the latter’s Game Work to offer seven ‘prompts’ for examining computer games. These prompts are in fact provocations--at times contrarian, never polemic--that engender new ways to think about the objects of study. Three chapters emphasize the difficulties that confront scholars, developers, and players who attempt to discuss computer games, a topical domain that is protean, expansive, and at best challenging to delineate. Spurning received wisdom, a chapter on ‘aimlessness’ argues that computer games are ‘fundamentally boring’; a chapter on ‘work’ illustrates how computer games can be best understood as labor and not play. A chapter on ‘anachronism’ locates computer games in terms of time (e.g., compressed product-release cycles, play objectives that hearken back to ludic pastimes hundreds of years old), and a chapter on ‘duplicity’ examines how games, the game industry, and gamers are complicit in willing suspensions of disbelief. Unsurprisingly, the authors supply a myriad of references to both game studies scholarship and computer games. The result will please a broad audience. Summing Up: Recommended.”--CHOICE

Judd Ethan Ruggill (Arizona State University) and Ken S. McAllister (University of Arizona) co-direct the Learning Games Initiative (LGI), a transdisciplinary, inter-institutional research group that studies, teaches with, and builds computer games. They also curate one of the world’s largest research-oriented computer game archives, and have written and lectured extensively on the necessity of interdisciplinary collaboration, the politics of digital media, and the importance of play in scholarship.