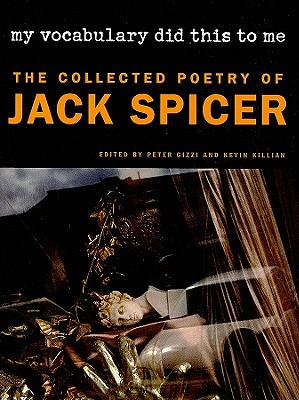 My Vocabulary Did This to Me

An essential collection of a highly original American poet Winner of the Northern California Independent Booksellers Award for Poetry (2009)
Winner of the American Book Award (2009) In 1965, when the poet Jack Spicer died at the age of forty, he left behind a trunkful of papers and manuscripts and a few copies of the seven small books he had seen to press. A West Coast poet, his influence spanned the national literary scene of the 1950s and '60s, though in many ways Spicer's innovative writing ran counter to that of his contemporaries in the New York School and the West Coast Beat movement. Now, more than forty years later, Spicer's voice is more compelling, insistent, and timely than ever. During his short but prolific life, Spicer troubled the concepts of translation, voice, and the act of poetic composition itself. My Vocabulary Did This to Me is a landmark publication of this essential poet's life work, and includes poems that have become increasingly hard to find and many published here for the first time.

JACK SPICER (1925-1965) published books including After Lorca (1957), Billy the Kid (1959), and The Holy Grail (1962). PETER GIZZI is a poet and author of numerous books, including The Outernationale (2007), who lives in Holyoke, Massachusetts. KEVIN KILLIAN is a poet, novelist, critic, and playwright living in San Francisco.
Loading...
or support indie stores by buying on