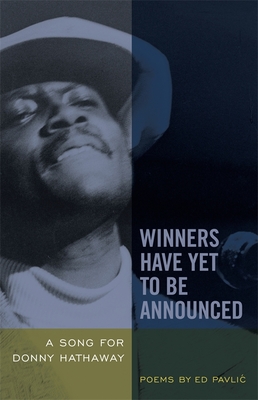 Winners Have Yet to Be Announced

A Song for Donny Hathaway

This moving collection of prose poems about seventies soul singer Donny Hathaway presents a complex view of a gifted artist through imagined conversations and interviews that convey the voices, surroundings, and clashing dimensions of Hathaway's life.

Among mainstream audiences Hathaway is perhaps best known either as the syrupy voice singing with Roberta Flack in "Where Is the Love" or for his shocking death--he was found dead beneath the open thirteenth-story window of his New York hotel room in 1979 at the age of thirty-three. Less well known are the depth of his classical and gospel training, his wide-ranging intellectual interests, and the respect his musical knowledge, talent, and versatility commanded from collaborators like Curtis Mayfield and Aretha Franklin. Meanwhile, among listeners with special affinity for soul music of the 1970s, even almost thirty years after his death, no voice burns with the intensity of Hathaway's own in the great solo ballads and freedom songs such as "A Song for You," "Giving Up," "Someday We'll All Be Free," and "To Be Young, Gifted, and Black." Winners Have Yet to Be Announced pushes poetry toward the rich characterization and depth of a novel. Yet it is the capacity of poetic language that allows the book to examine Donny Hathaway's vivid and remarkable life without attempting to resolve the mysteries within which he lived and created and sang.

Praise For Winners Have Yet to Be Announced: A Song for Donny Hathaway…

"Ed Pavlic shapes the ineffable (some call it Duende, some call it Soul) into a language haunting the borders of the sayable and unsayable, the sung and unsung. He casts Hathaway as Orpheus searching 'for an opening between need and can't have and have and can't need.' Winners Have Yet to Be Announced is a meditation on our own between-ness: our wish to be rooted pulling against our wish to transcend. It is a visionary book."--Terrance Hayes, author of Wind in a Box

"To capture the monumental paradoxes and prismatic genius of Donny Hathaway, one must have an epic imagination and a sense of language that flames in poetry toward transcendent truth. Ed Pavlic rises to the task admirably. Winners Have Yet to Be Announced is a book of breathtaking literary and intellectual invention, a searing, soulful exploration of the songs and silences 'and the unforgiving pains and desperations, and the demons and disharmonies too' that tracked Hathaway into sonic immortality. Finally Hathaway's musical and moral legacy is matched with a metaphoric intensity that honors the master's splendidly unique creativity."--Michael Eric Dyson, author of Know What I Mean?: Reflections on Hip Hop

"Ed Pavlic's tribute to Donny Hathaway is stunning. Pavlic writes the way Hathaway sang. Can you hear it? Terror and joy ride the wave together. This is a song, sung over a song, sung over another song and another, until it finds expression through a strange angel of a human."--Joy Harjo, author of How We Became Human

"This year saw some important new poetry collections by Ruth Stone, Frank Bidart, Mark Doty, and Patricia Smith, but Ed Pavlic's dizzyingly original collection of prose poems, Winners Have Yet to Be Announced: A Song for Donny Hathaway, is one of the most brilliantly conceived works I've read in years. With his singular phrasings and extraordinary ability to capture the nuances of time and place in an array of voices, Pavlic's poetry is as close to music as any American writer has ever accomplished."--"Poetry Collection of the Year", Bloomsbury Review

"Ed Pavlic creates Donny Hathaway as a man in a torn up world that's coming back into focus like snowflakes falling from a midnight sky and just as perishable. All Donny can do about it is turn what he sees and hears and feels into glorious music, and pray that someone else will understand. Winners Have Yet to Be Announced puts you in that man's head, and it's a marvelous, frightening, sobering, delirious place to be."--Dave Marsh, author of The Beatles' Second Album

"Pavlic's wide-ranging, lyrical approach matches Hathaway's virtuosity and honors him with equal amounts of soul and heart. He seems nourished by the innards of Hathaway's life, both intellectual and spiritual—and how can he not but be inspired? Winners Have Yet to Be Announced is a hammered book about the tragic eloquence of a man's life."--Major Jackson, author of Hoops

"Donny Hathaway traced the lonely line between gospel and the blues and tried to tell us that 'Someday We'll All Be Free,' though in the end he was perhaps unable to believe it himself. Pavlic's compelling meditation on Hathaway allows us to see how grace can grow in the cracks of city sidewalks and redemption may catch us even when we leap from its grasp."--Timothy B. Tyson, author of Blood Done Sign My Name

"A dearth of original interview material has led to much speculation about the creative process, inner workings and mental turmoil that made the late Donny Hathaway a black icon beyond his thirty-three years. Using the art of vivid poetic prose and imagery, Pavlic paints a portrait of a brilliant artist possessed by music, a nonetheless reluctant live performer whose ability to evoke emotion and provoke response among his audience transcended his own often deeply troubled state of mind. Through Pavlic's work, we are left with a greater understanding and comprehension of Hathaway, both man and musical master."--David Nathan, author of The Soulful Divas

Ed Pavlic is associate professor of English and director of the MFA/PhD program in creative writing at the University of Georgia. His previous books of poems are "Labors Lost Left Unfinished" and "Paraph of Bone & Other Kinds of Blue," which was selected by Adrienne Rich for the "American Poetry Review" / Honickman First Book Prize. He has also published a scholarly work, "Crossroads Modernism," on African American literary culture.
Loading...
or support indie stores by buying on