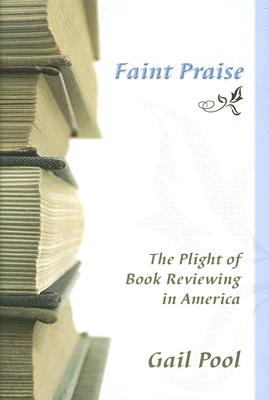 The Plight of Book Reviewing in America

For more than two hundred years, book reviewers have influenced American readers, setting our literary agenda by helping us determine not only what we read but also what we think about what we read. And for nearly as long, critics of these critics have lambasted book reviews for their overpraise, hostility, banality, and bias.

Faint Praise takes a hard and long-overdue look at the institution of book reviewing. Gail Pool, herself an accomplished reviewer and review editor, analyzes the inner workings of this troubled trade to show how it works—and why it so often fails to work well. She reveals why bad reviewing happens despite good intentions and how it is that so many intelligent people who love books can say so many unintelligent things on their behalf.

Reviewers have the power to award prestige to authors, give prominence to topics, and shape opinion and taste; yet most readers have little knowledge of why certain books are selected for review, why certain reviewers are selected to review them, and why they so often praise books that aren’t all that good. Pool takes readers behind the scenes to describe how editors choose books for review and assign them to reviewers, and she examines the additional roles played by publishers, authors, and readers. In describing the context of reviewing, she reveals a culture with little interest in literature, much antipathy to criticism, and a decided weakness for praise. In dissecting the language of reviews, Pool demonstrates how it often boils down to unbelievable hype.

Pool explores the multifaceted world of book reviewing today, contrasting traditional methods of reviewing with alternative book coverage, from Amazon.com to Oprah, and suggesting how the more established practices could be revised. She also explores the divide between service journalism practiced by reviewers versus the alleged high art served up by literary critics—and what this fuzzy boundary between reviewing and criticism really means.

This is the first book to analyze the field in depth, weighing the inherent difficulties of reviewing against the unacceptable practices that undermine the very reasons we read—and need—reviews. Faint Praise is a book not just for those who create and review books but also for everyone who loves books. By demystifying this hidden process, Pool helps everyone understand how to read reviews—and better decide what to read.

Gail Pool is a freelance journalist and reviewer based in Cambridge, Massachusetts. She is a former editor of the Boston Review; she has been a book columnist for the Christian Science Monitor, Cleveland Plain Dealer, and San Diego Union-Tribune; and she is a member of the National Book Critics Circle. She is the editor of Other People’s Mail: An Anthology of Letter Stories (University of Missouri Press).
Loading...
or
Not Currently Available for Direct Purchase