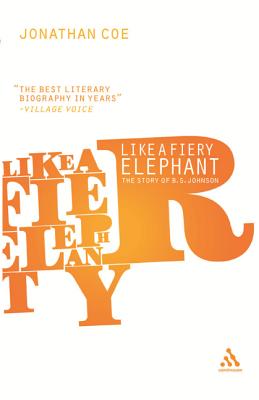 The Story of B.S. Johnson

The most critically acclaimed literary biography published in the UK in 2004, Like a Fiery Elephant tells the story of B.S. Johnson, one of Britain's most innovative, passionate, and controversial writers of the 1960s and 70s. Johnson was an unflinching advocate for the avant-garde in both literature and film, and held strong (some would say extreme) views on the future of the novel. Working firmly in the tradition of Joyce and Beckett-the latter of whom became a friend and mentor of sorts to Johnson-he tormented his agents, editors, and publishers with innovations that included a book with holes cut throught the pages (Albert Angelo) and a novel published in a box so that its unbound chapters could be read in any order (The Unfortunates). Johnson committed suicide in 1973, at the age of forty.

The story of Johnson's life is fascinating enough-but what makes this biography truly extraordinary (even for those who have never heard of Johnson) is the intelligence and honesty that Jonathan Coe brings to the form itself. Coe is a novelist, not a biographer, and he enjoys telling stories. How, then, to write the biography of his one-time hero, whose whole career as a novelist was based around the belief that "telling stories is telling lies?"

Jonathan Coe is one of Britain's finest contemporary novelists. He is most well-known for What A Carve Up! (published in the US as The Winshaw Legacy), The House of Sleep, and The Rotters' Club. His seventh novel, The Closed Circle, will be published by Knopf in May 2005.
Loading...
or
Not Currently Available for Direct Purchase